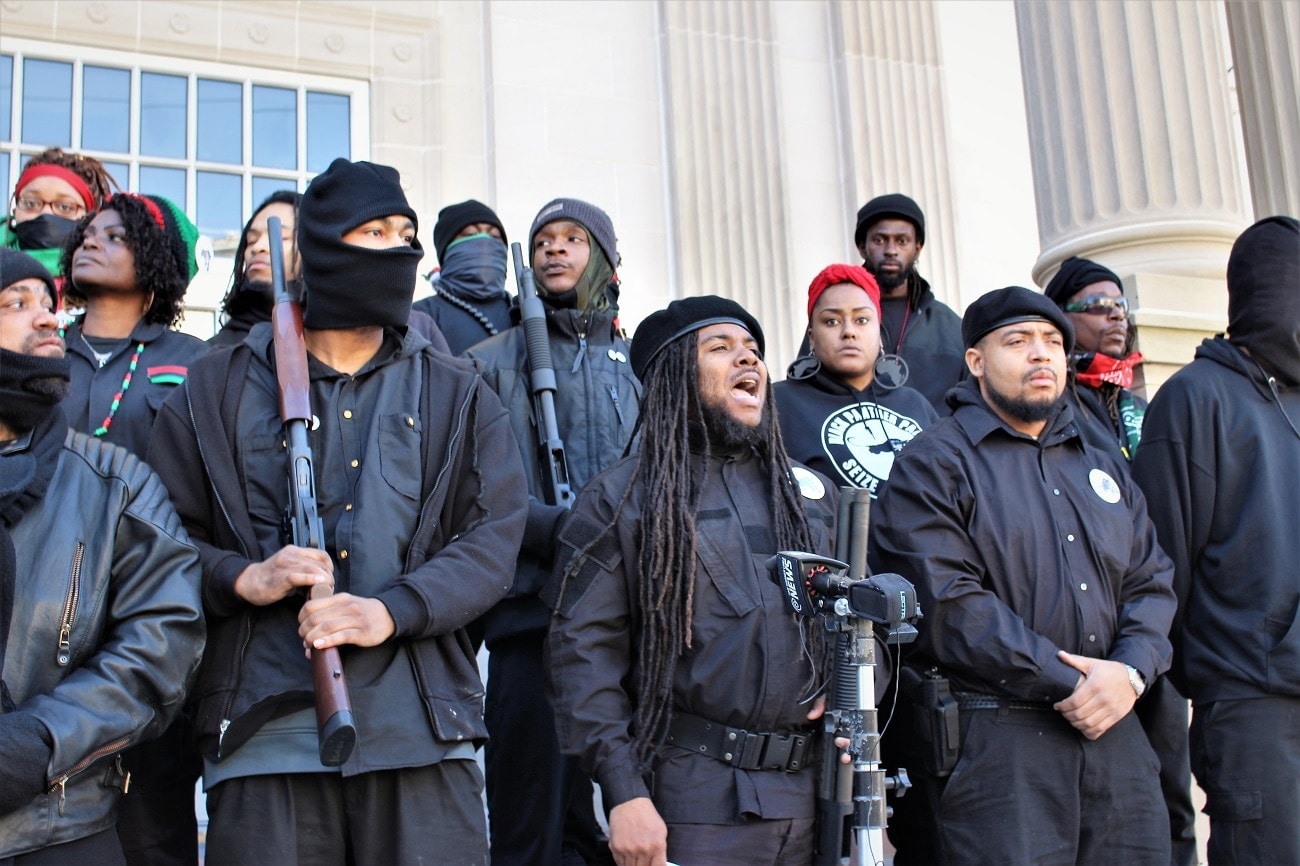 Members of the Revolutionary Black Panther Party had their firearms seized at a Sunday news conference held in front of the New Hanover County Courthouse in Wilmington, North Carolina.

The group peacefully laid down their weapons when a New Hanover County deputy informed group leader Dr. Alli Muhammad they they were in violation of the law. Deputies then loaded the guns and transported them to the sheriff’s office, where owners can pick them up Monday.

The New Hanover County Sheriff’s office said law enforcement arrived at the news conference because of its location on county property at the courthouse and seized the members’ weapons due to a county ordinance prohibiting firearms on the property, WWAY reports. North Carolina state law also prohibits the carrying of firearms at any demonstration on property owned by the state.

Law enforcement said the group had brought two revolvers, three shotguns, and five semi-automatic pistols to the conference, all of which were loaded.

In addition to giving up their guns, deputies also instructed some Black Panther members to lower their masks, the wearing of which is prohibited at meetings or demonstrations under North Carolina state law.

“We will not tolerate violations of the law,” Hanover Sheriff Ed McMahon said.

Though the process went smoothly with the Hanover County deputies, Black Panther members became visibly upset when Wilmington Police also arrived and reportedly raised their guns at the crowd. Among those shaken were relatives of Brandon Smith, who was shot and killed by officers in 2013 after he shot a deputy.

“Something has to be done,” Davis said. “We just want justice for my brother, because what they did was wrong.”

Earlier in the week, the Black Panthers announced they were going to hold a “human rights tribunal” at a local community center on Saturday and an armed march on Sunday, the Port City Daily reports. In response to their announcement, District Attorney Ben David and Wilmington Police Chief Ralph Evangelous said they would support First Amendment rights but would also enforce state law regarding the carrying of firearms during certain activities.

At the press conference Sunday, leader Alli Muhammad claimed Wilmington Police prevented the group from holding the event on Saturday and that their First and Second Amendment rights had been violated.

“We maintain that the current statute cited by the district attorney and the police chief in order to violate our constitutional, civil and human rights is because we are black, and because we are Black Panther. This is in clear violation of the state and United States Constitution, freedom of expression and the right to bear arms,” Muhammad said during the press conference.

Muhammad stated that he is a member of the National Rifle Association and firearms instructor who teaches courses on hunting safety and civilian firearms safety. He also claimed to have a concealed weapons permit and a federal firearms license.

After the press conference, the Black Panthers convened at a private home to hold the tribunal “for victims of genocide” that had originally been scheduled for Saturday. According the Port City Daily, many gathered around to hear Muhammad speak on human rights, politics, firearms rights and safety, and the effects of slavery that can still be felt today.

“We are not anti-police,” Muhammad said. “We’re not anti-white, we are not racists … We believe and respect the humanity of all people regardless of race, creed or occupation. The reason why we fight and stand so hard for people of African descent, is because we suffer the hardest.”

A vigil for Brandon Smith was held after the tribunal, in which Muhammad also recognized others who have been killed by law enforcement around the country. Muhammad claimed those killed by officers were victims of “terrorism and genocide carried out by the agents of the state known as law enforcement,” but did purposefully state there were many law enforcement officers who did not abuse their power.

Muhammad said the group is still planning a march on Wilmington but did not give further details.