Dimitri Karras is selling the unfinished “no-FFL-needed” AR lowers seized by the Bureau of Alcohol, Tobacco, Firearms and Explosives in 2014 and later returned to him after a lawsuit– though the regulatory agency still considers them finished firearms.

Karras is candid in his take on the bi-colored polymer’s legality, citing that, while he maintains they are not “firearm receivers” as defined by federal regulations, the ATF continued to insist the the items were “illegally manufactured firearm receivers” when they returned them to him.

Of the 6,000 EP80 lowers impounded, he got most of them back (he says 18 went missing) after a series of suits and notes that no charges were ever filed over the parts. At the time, the ATF described the receivers as containing cavities with a different color polymer “biscuit,” making it easier to mill out the cavities and convert the lower into an operational firearm. 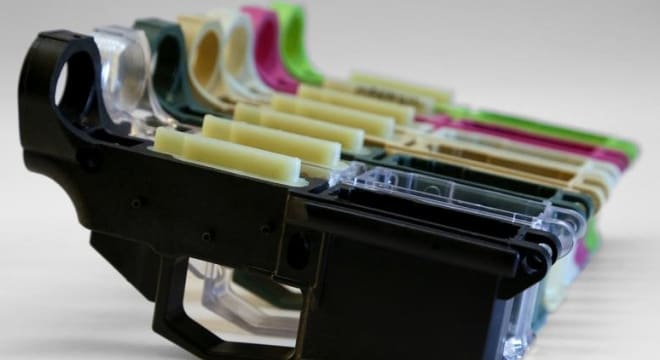 What made the gun parts questionable in the eyes of the ATF was the different color “biscuit” filling the cavities that needed to be cut away to produce a working receiver. (Photo: Guntraband)

In a similar case, Calfornia-based EP Armory, was raided at the same time and agreed to forfeit some 3,800 lower receivers but did not have to admit to wrongdoing.

On Karras’ Guntraband page giving detailed order information for the $75 lowers, he notes that “All items are sold AS-IS with no express or implied guarantee or warranty as to their usability, merchantability, serviceability, quality, functionality or any other such trait,” and that they are not eligible to ship to California, New York or New Jersey.

“The nest has been kicked, now it’s time to see what the hornets think about it,” noted Karras on social media about the lowers.