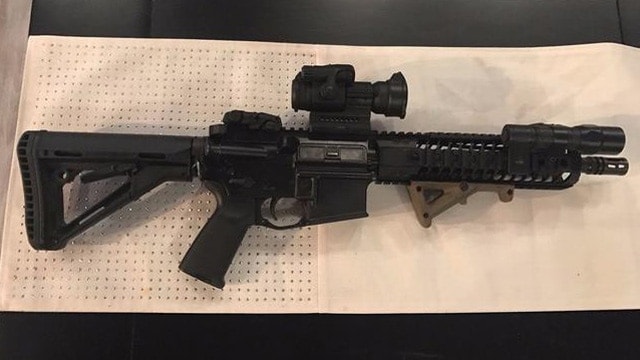 The same day an Orlando police officer’s vehicle was stolen, a short-barreled AR-style rifle was stolen from another officer’s patrol car some 40 miles away. (Photo: Eustis Police Department)

The Orlando Police Department has launched an investigation after a SWAT member’s unmarked patrol car containing a gun and police gear was stolen sometime Saturday morning outside of his apartment in the Baldwin Park area.

Although authorities later recovered the vehicle, a Heckler & Koch UMP45 submachine gun and four full magazines, along with two additional magazines for a handgun and a helmet are still missing, according to local reports.

A SWAT uniform, gloves, a traffic vest and rappelling gear were also left behind. Police said the recovered gear and patrol car were found at two different locations, about two miles apart.

Investigators believe the theft occurred sometime between 3 a.m. and 11 a.m. The officer, who has not been publicly identified, said he woke up around 11 a.m., realized the car was missing and promptly contacted the police department.

Orlando police Sgt. Wanda Miglio said although they do believe the weapon was locked and stored in a secured container as it should have been, there will still be an internal investigation surrounding the incident.

Police did not provide any details about a possible suspect and although there does not appear to be a connection, a similar theft occurred about 24 hours later.

Sometime between late Saturday night and early Sunday morning, a short barreled AR-style rifle was stolen from a Tavares police officer’s patrol car that was parked in the driveway of his Eustis home, about 40 miles outside of Orlando.

The officer, who was not publicly identified, said he awakened Sunday morning to find the windows in his patrol car had been smashed.

Eustis Police Cpl. Sarah Coursey confirmed that the vehicle, which was clearly marked as a police car, was locked and said the weapon had been pried out of a gun lock inside the vehicle. Coursey called it “a very bold move” noting the car was parked right outside of the officer’s front door.