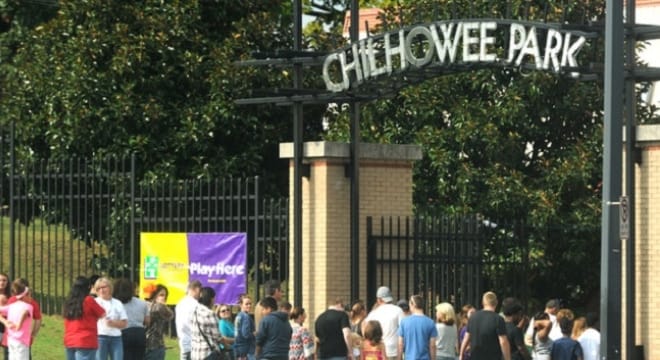 The 81-acre city-owned Chilhowee Park is not actually a park when being used for private or ticketed events according to the city. (Photo: Adam Lau/Knoxville News Sentinel)

The National Rifle Association’s lawsuit over the Knoxville’s prohibition on concealed carry in an area park was settled in Knox County Circuit Court last week.

Under the agreement in the case of Vreeland v. City of Knoxville, lawful gun owners will be allowed to carry in some areas of the 81-acre Chilhowee Park when it is not being used for ticketed events, in which case the entire site will be a gun free zone.

“If somebody wants to avail themselves of the facility on an average day (when no events are scheduled), it’s fine for them to have a handgun,” city Law Director Charles Swanson said Friday, as reported by the Knoxville News Sentinel. “Otherwise, no guns will be allowed.”

The suit, filed in 2015 by plaintiff Pandora Vreeland, an area resident and concealed carry permit holder, came about after she claimed she could not safely attend a recent event at Chilhowee, as she had to do so unarmed, thus violating her Second Amendment rights.

Gov. Bill Haslam that year had signed a law forbidding local city and county governments to ban a lawful permit holder from carrying a handgun in a public park that is owned, operated or used by that local government. To this, the suit argued Knoxville city and county officials had classified Chilhowee in a variety of ways to circumvent state preemption laws, specifically citing the park was maintained by a third party and thus not under city control.

In July 2015, the Tennessee Attorney General’s office issued an opinion the law applied even if the local government allowed private entities to manage the park, effectively voiding Knoxville’s argument.

The NRA thinks the settlement is a good balance between the right to carry firearms in public parks and the city’s use of Chilhowee as a secure facility for ticketed events.

“This is an important settlement that reaffirms law-abiding Tennesseans have a right to defend themselves throughout the state,” said Jennifer Baker, director of public affairs of the NRA’s Institute for Legislative Action in a statement.

A local gun rights group, the Tennessee Firearms Association, who brought their own suit against Knoxville over the park’s gun ban last year, feels the Vreeland settlement falls short.

In a statement emailed by TFA Executive Director John Harris, the group and “its members fully intend to pursue” their pending case.