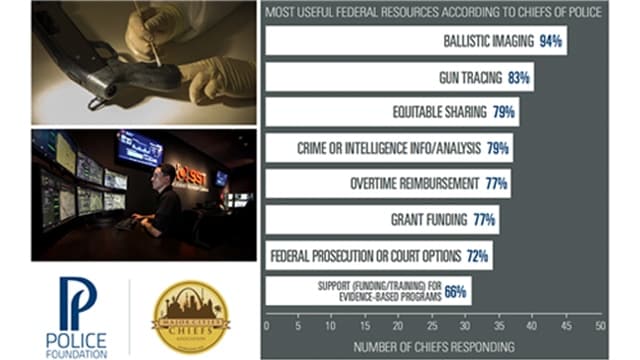 A survey of police chiefs and other law enforcement leadership found that ballistic imaging would be the most useful federal resource for local law enforcement agencies. (Photo: Police Foundation)

A new report released this month outlines 25 recommendations for how policymakers and the Trump administration can work to reduce violent crime in American cities.

The Police Foundation, a group dedicated to improving “policing through innovation and science” compiled the 84-page report. The foundation formed the recommendations through an examination of crime statistics coupled with a survey of Major Cities Chiefs Association membership, and other law enforcement leadership.

The report comes as President Trump renews his pledge to be a law and order president, and has promised the violence-plagued city of Chicago he’ll “send in the Feds.”

As many as 94 percent of the city and county law enforcement officials surveyed said ballistic imaging would be the most useful federal resource in fighting violent crime. Gun tracing would be another useful resource, according to 83% of those surveyed. Crime or intelligence information and analysis, overtime reimbursement, grant funding and federal prosecution were also noted as valuable federal contributions to local crime fighting efforts.

“Local law enforcement executives spoke unmistakably about the importance of federal tools and processes, such as the National Integrated Ballistic Information Network (NIBIN) and e-Trace — two essential technologies provided by the ATF to local law enforcement — and reducing the restrictions that prevent ATF from providing these tools to state and local law enforcement in the most effective manner,” reads the report.

The report notes that those surveyed want to see federal firearms trafficking and straw purchasing laws put into place, “and comprehensive and universal background checks, which most Americans support.”

“Gun trafficking, illegal gun markets, theft, and illegal diversion are critical issues that have not been sufficiently addressed in the criminal justice system. This is evidenced by the fact that the U.S. has no federal firearms trafficking or straw purchasing laws, and there are only a handful of federal and local law enforcement agencies that address gun markets through their enforcement approaches,” reads the report.

Still, those who drafted the report recognize that violent crime is multi-systemic.

“The roots of violent crime must be addressed in all systems of government. Systemic poverty, faulty educational systems, discriminatory housing policies, and an overburdened mental health care system are only a few of the issues that are generating violent crime swells,” reads the report.

“To effectively reverse the trends we are seeing today, it is imperative that the new Administration and new Congress provide effective and reasoned leadership on this issue and avoid partisan positions that have allowed gun violence to continue to take innocent lives,” the report continues.