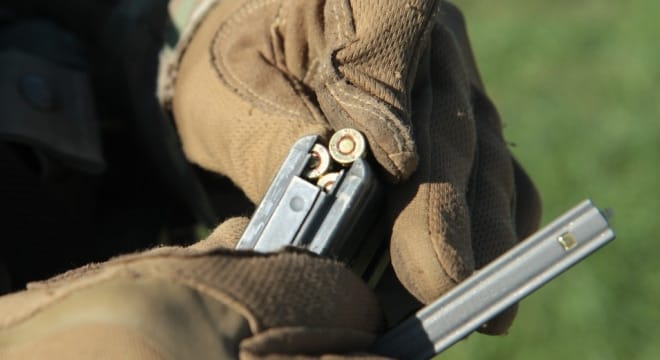 A Soldier loads a magazine while preparing to step on the firing line for the TAG Match at Camp Atterbury, Oct. 23, 2016. While the Marines are moving to replace metal-bodied mags with polymer models, some on Capitol Hill want to know why the Army has not done the same. (Photo: Sgt. Evan Myers/US Army National Guard)

With news the Marines have adopted a variant of the Magpul PMAG as standard, four U.S Senators with military service on their resume asked the Army where they stand on polymer mags.

The lawmakers penned a letter to Army Chief of Staff Gen. Mark Milley last week, calling the branch’s top officer out when it comes to the fact that polymer mags are not currently authorized.

“We request a response as to why the Army has not approved any polymer magazines for use in combat, or in training, and an update on if the Army is considering approving them now,” noted the lawmakers, pointing out that the Marine Corps recently approved use of a polymer magazine for their rifles after a five-year moratorium on such devices by both services.

Last December, Magpul announced the Marines had, after a four-year testing evolution, adopted their PMAG 30 AR/M4 GEN M3 magazine for use in all of their 5.56mm platforms. In government-administered tests, the PMAG reportedly cycled 20,400 rounds of M855A1 ammo without any magazine-related stoppages.

The Senators who signed the letter, all Republicans, included Tom Cotton of Arkansas, who served as a platoon leader in the 101st Airborne in Iraq; Iowa’s Joni Ernst, a retired National Guard Lt. Colonel; Oklahoma’s Jim Inhofe, a 1950’s-era Army veteran; and Johnny Isakson, who served in the Georgia Air National Guard as an enlisted man during the Vietnam era.

In a statement released by Ernst’s office, the letter is “part of her effort to ensure our warfighters have the best equipment possible” and helps stress “the need to ensure our military doesn’t fall behind countries like Russia in providing modern and lethal equipment, specifically as it relates to our rifles and handguns.”