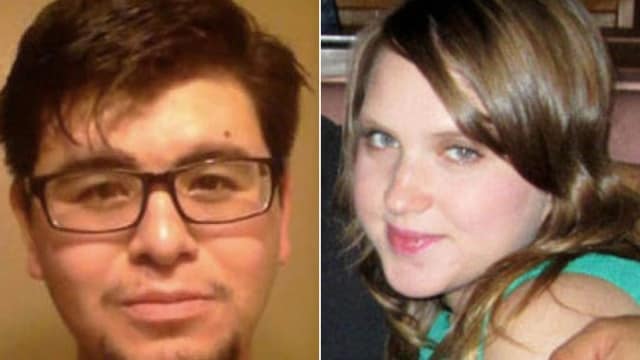 Enrique Marquez, left, and Mariya Chernykh, right, are accused of entering into a fraudulent marriage to obtain immigration benefits for Chernykh.

The wife of the man who provided weapons used in the 2015 mass shooting in San Bernardino pleaded guilty in federal court last week to engaging in a sham marriage for immigration benefits.

Mariyah Chernykh, a 26-year-old Russian citizen, admitted last week to conspiracy, perjury and making false statements to investigators about the scheme. A sentencing hearing is scheduled for November, where she faces up to 20 years in prison and a $1 million fine.

Authorities investigating the shooting that left 14 people dead and 22 injured uncovered the immigration fraud scheme, the unraveling of which led to the only arrests involved in the case as the gunmen — Rizwan Farook and his wife Tashfin Malik — were killed during a shootout with police.

Chernykh’s plea is the second conviction in the case. According to court documents, Chernykh, her sister and her husband proposed to family friend Enrique Marquez, Jr. that they marry so Chernykh could obtain government benefits. Marquez agreed for $200 per month.

The investigation also found that Marquez supplied two firearms used by the gunmen during the incident. Although Marquez was not directly involved in the shooting, he allegedly plotted to carry out a similar attacks in the Inland Empire years earlier. Marquez will go on trial in September.

Chernykh’s sister, Tatiana Farook, is married to Raheel Farook, the brother of Rizwan Farook. Tatiana Farook is scheduled to go on trial in March.

Raheel Farook pleaded guilty to his role in the scheme in January. His sentencing hearing is scheduled for November.