Study points to link in school shootings and economic insecurity 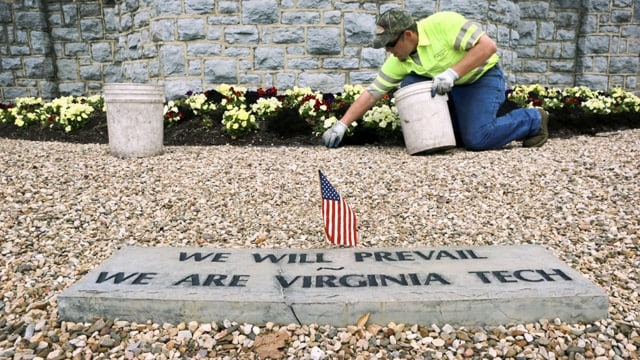 Chris Perdue tends to flowers near a memorial at Virginia Tech where 32 people were killed and 17 injured during a mass shooting in 2007. (Photo: Matt Gentry / The Roanoke Times)

Researchers at Northwestern University published the results of a study Monday which appear to indicate the number of school shootings occurring at both secondary schools and colleges increase during times of economic insecurity.

“Economic Insecurity and the Rise in Gun Violence at U.S. Schools” was published in the journal Nature Human Behaviour and analyzed a database of 381 school shootings that occurred over the last 25 years.

Researchers found incidents of gun violence increased during the times when unemployment rates were also up during those 25 years, with two distinct upticks in school shootings – once from 1992 to 1994, which saw an increase in high school-related shootings, and again from 2007 to 2013, which mostly affected colleges across the country.

Researchers noted that during times of high unemployment and other economic challenges, students could be reacting to their own economic struggles as well as responding to their parents’ hardships.

“If you stay in school, it is because, to some extent, you are buying into the idea that you will graduate, get a job and be a productive member of society,” said Luis Amaral, co-author of the study and co-director of Northwestern’s Institute on Complex Systems.

Amaral went on to say a breakdown in that system can sometimes result in a feeling of betrayal.

In other words, “You do all of these things and then you don’t get the reward you expect,” Amaral said.

But Amaral also pointed out what he referred to as a “double whammy,” the lack of funds for schools and anti-violence programs at the times they are needed the most.

“When the economy is not good there is a higher likelihood of more school shootings and that’s just when localities have less resources for after school programming or increased security,” Amaral concluded.