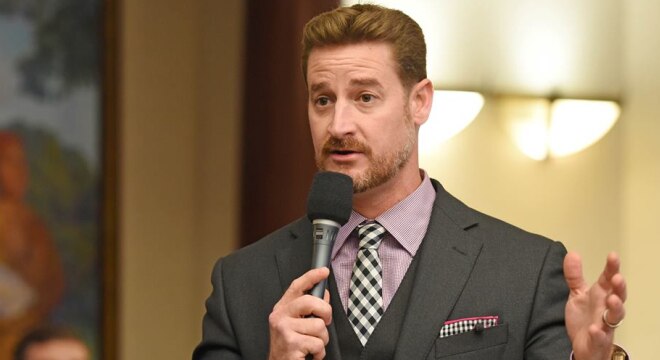 Florida Sen. Greg Steube, R-Sarasota, thinks businesses should be liable if they establish a gun free zone and someone gets hurt. (Photo: Greg Steube via Facebook)

A new Republican state Senator introduced a bill this week to place civil liability on businesses that ban lawful guns in the event of a patron getting hurt.

The measure, filed Tuesday, would encourage businesses to drop gun free zones out of fear of potential lawsuits following an incident, in effect, declaring one at their own risk and assuming custodial responsibility for their patrons.

“It’s the premise in Florida that if a private business wants to prohibit guns in their location that’s open to the public, that’s fine they can do that,” Sen. Greg Steube, R-Sarasota, said. “But if you’re going to do that, in my opinion, I should have some assumption that I’m going to be protected as a conceal-carry permit-holder because you’re taking away my ability to defend myself.”

Steube’s legislation, SB 610, would encourage publicly accessible businesses to drop current gun free zones out of fear of potential lawsuits arising after an incident. Those seeking to litigate would have a two-year window from the event and need to show they were legally able to carry a weapon at the time but were not armed due to a “no guns” sign posted in the business.

Similar legislation has been filed in Tennessee, Texas and Missouri in recent months.

Gun control advocates oppose Steube’s bill and others filed by the former state representative this session.

“Make no mistake, this is yet another attempt by the gun lobby to normalize its agenda of guns everywhere, for everyone, no questions asked,” said Michelle Gajda, with the Florida chapter of Moms Demand Action in a statement.

Meanwhile, Marion Hammer, executive director of the Unified Sportsmen of Florida and a former National Rifle Association president, argues the proposal is only fair.

“When a business provides a safe-zone for criminals giving the criminal element free reign over that property without fear of being harmed by a law-abiding citizen, they need to increase their liability insurance coverage,” Hammer told Guns.com. “When they take away a person’s ability to be responsible for personal safety, they must be prepared to provide safety for him or her. Providing safe havens for mass shooters has to stop.”