Guns, cannons and cars discovered at the bottom of Detroit River 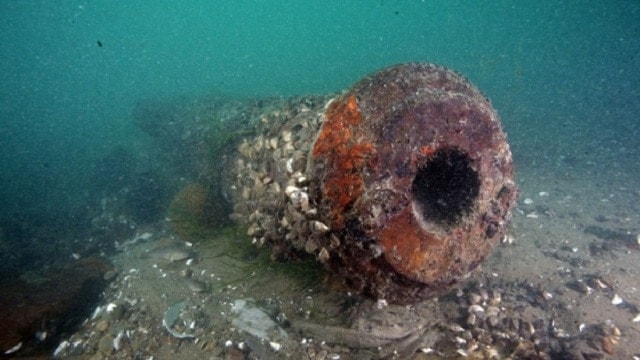 Shot by Sgt. Ken Stiel, this 200 year old cannon was found at the bottom of the Detroit River (Photo: AP)

The bottom of the Detroit River has revealed many a rusted treasure over the years, as police divers have found numerous historical artifacts buried beneath the mud.

Some of the relics recovered by police divers include guns, cars and even cannons. The hundreds of recovered guns range from automatic handguns to wooden muskets, the Detroit Free Press reports.

City ordinance prohibits the public from diving in the river within city limits, due to safety concerns and the amount of potential evidence lurking beneath the surface.

“For as long as this city has been around, people have been throwing stuff into the water,” said Sgt. Dean Rademaker, part of the Detroit Police Underwater Recovery Team.

The police dive headquarters has mounted on the wall a M1 Carbine rifle, thought to be from sometime between World War II and the 1960s, and a rum-runner propeller from the Prohibition-era.

From the 1980s to 2011, six 18th century cannons have been hoisted up from the murky waters, the most recent being more than six-feet long and weighing around 1,300 pounds.

The cannons are thought to be connected to a pre-War of 1812 British military inventory. Henry Ford College librarian Dan Harrison theorizes that the British dumped the cannons because they were “too worn-out or small to do the job.”

Divers have also found numerous cars in the river, including a DeLorean in the 1980s and more recently a Jeep Cherokee and Nissan Xterra.