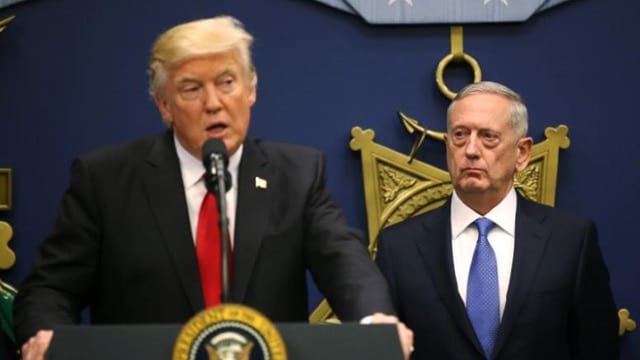 Despite reports of lackluster intelligence, the Pentagon and the White House on Thursday defended President Donald Trump’s first authorized military raid, saying months of planning were behind the operation, which killed a Navy SEAL and several foreign civilians, including children.

At Dover Air Force Base on Wednesday, Trump received the remains of the fallen SEAL, 36-year-old William “Ryan” Owens, and met with his family for about two hours. Officials say Owens did not die in vain. The raid resulted in reams of valuable intelligence on al-Qaida, including computer hard drives.

Navy Capt. Jeff Davis, a Pentagon spokesman, said America acquired “actionable intelligence” in the raid that can be used against an enemy that has “callous disrespect for human life,” according to a report from the Department of Defense. “[Al-Qaida in the Arabian Peninsula] remains the most capable of al-Qaida’s elements in exporting terror to the West,” Davis added.

On Trump’s orders, the Navy’s SEAL Team 6 carried out the raid on the heavily guarded home of an al-Qaida collaborator in central Yemen on Jan. 29. When militants, including women, started firing on the SEALs, U.S. aircraft, including drones, flew in to support the commandos on the ground, firing upon the militants, according to Davis.

When it was over, Owens was dead. A military aircraft involved in the raid, an MV-22 Osprey, landed hard, injuring at least two other American personnel. The $75 million aircraft was destroyed in a U.S. airstrike to prevent extremists in the area from exploiting its technology.

“People were afraid to leave their houses because the sound of choppers and drones were all over the sky,” said Jabbr Abu Soraima, a tribal sheik who lives in the village. “Everyone feared of being hit by the drones or shot by the soldiers on the ground.”

Initially, the Pentagon said there weren’t any civilian casualties in the raid, but Yemeni authorities reported otherwise, and photos, allegedly of civilians’ bodies, started to surface on social media. Medics on the ground said 30 people were killed. The Pentagon said 14 of them were militants. Reuters reports that as many as 15 of the peopled killed were women and children, including the 8-year-old daughter of a U.S.-born al-Qaida cleric.

Military officials told Reuters the operation lacked adequate intelligence and that the SEALs were dropped into a heavily fortified area with snipers and landmines. The New York Times reported Wednesday the al-Qaida fighters learned about the raid, and the U.S. forces knew the mission had been compromised but continued on.

“They kind of knew they were screwed from the beginning,” a former SEAL Team 6 official told the Times.

The Pentagon disputes those reports. “We have nothing to suggest that this was compromised,” said Davis, according to the Washington Post. Davis said such claims do not “match with reality.”

Answering questions Thursday about how the operation was conceived, White House spokesman Sean Spicer said the plan was submitted to the DoD in early November and approved by the Pentagon in mid-December. In early January, the Obama administration approved the mission, but, according to Spicer, they wanted to wait for a “moonless night.” That night wouldn’t come until after Trump was sworn in.

Spicer said the president met with his advisers in the run-up to the operation, including Defense Secretary Jim Mattis and chairman of the Joint Chiefs of Staff Joe Dunford.

“This was a very, very well thought-out and executed effort,” said Spicer. “It’s hard to ever call something a complete success when you have the loss of life or people injured. But I think when you look at the totality of what was gained to prevent the future loss of life here in America and against our people and our institutions and probably throughout the world in terms of what some of these individuals could have done, I think it is a successful operation by all standards.”

The Navy announced Thursday that Chief Special Warfare Operator William “Ryan” Owens, the SEAL killed in the raid, will be posthumously advanced to senior chief petty officer. Owens was a native of Peoria, Illinois, a husband and a father.

“My deepest thoughts and humblest prayers are with the family of this fallen service member,” Trump said.