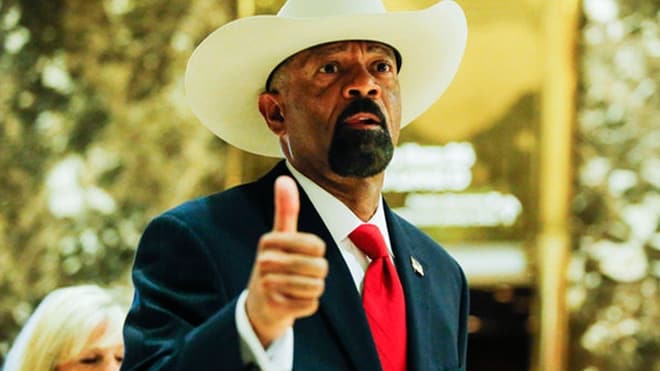 Conservative speaker David Clarke has been named in a lawsuit alleging he abused his power as Milwaukee sheriff when he ordered a man be detained at an airport and later singled him out online.

Milwaukee resident Daniel Black says the sheriff instructed deputies to stop and interrogate him for political reasons and later attacked him on social media after he filed a personal complaint to the county.

The two men had a brief exchange as they boarded a plane headed for Milwaukee at Dallas-Fort Worth International Airport on Jan. 15, according to the civil complaint filed in a Milwaukee federal court on Feb. 2. On that particular day, the Green Bay Packers played and Dallas Cowboys, and Clarke was wearing Cowboys gear instead of his signature cowboy hat.

As Black walked past Clarke, who was already seated, he recognized Clarke and asked if he was in fact Milwaukee Sheriff David Clarke, the lawsuit says. Clarke said he was and Black shook his head, presumably at the Wisconsin native’s choice in football team. Clarke asked if Black had a problem to which Black said no.

When Black stepped off the plane at the Milwaukee airport, he saw Clarke waiting at the gate who then motioned to a team of deputies, the lawsuit says. They arrested Black and escorted him through the airport to an empty waiting area where they interrogated him for 15 minutes about his political opinions.

Black filed a harassment claim to the county against Clarke, saying he was “the victim of the sheriff’s abuse of power.” Clarke’s office responded by sharing the complaint on social media and stating: “(Clarke) reserves the reasonable right to pre-empt a possible assault.” His office also shared a threatening Internet meme. “Cheer up, snowflake. If Sheriff Clarke were to really harass you, you wouldn’t be around to whine about it,” reads the meme written on a photograph of Black.

Clarke has not issued a statement regarding the lawsuit, saying his office does not comment on pending litigation. However, he did respond to a county Ethics Board investigation into the matter, characterizing the probe as “fake news” and a political witch hunt by a left-leaning county board member. He added that his department will not be cooperating with the investigation.

For the past three years Clarke has been gaining in popularity in conservative circles as a black law enforcement official who defends police amid controversies and derides community activists like Black Lives Matter. He’s known as a supporter of candidate and now President Donald Trump, who reportedly considered him for a cabinet position.

Clarke launched into the national spotlight in 2013, following the Sandy Hook school shooting, when he aired a public service announcement advising Milwaukee residents to arm themselves to defend against crime. He’s since become a regular speaker for the National Rifle Association and honoree for other pro-gun organizations.

The lawsuit says Black has experienced “violent verbal assaults” on social media because of Clarke’s characterization of the incident. The lawsuit also named the six deputies, who with Clarke, violated Black’s Fourth Amendment rights and damaged his reputation. For relief, Black has asked the court to award him damages and attorneys’ fees.