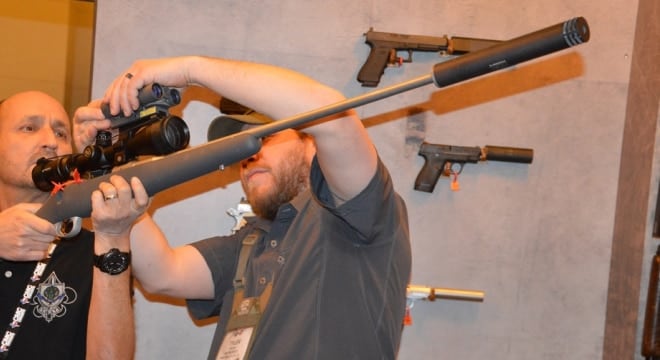 Suppressors are currently legal in 42 states– of which 40 allow their use in hunting– though this is subject to change with pending legislation. (Photo: Chris Eger/Guns.com)

With a federal deregulation bill advancing in Congress, lawmakers in several states that currently ban suppressor legality and ownership by civilians are pushing legislation of their own.

Currently, eight states ban National Firearms Act-compliant suppressors from civilian ownership and 10 prohibit their use in hunting, though this could soon change as Hawaii, Illinois, and Massachusetts are advancing bills to strike bans on possession while Connecticut is moving to expand their use to taking game.

A House bill introduced and backed by 10 Democrats, HB 1589, could end the state’s long-held ban on civilian ownership of silencers by allowing licensed hunters to purchase them and use them in sporting activities. Listed as a hunting safety measure, the proposal is referred to the Judiciary committee and is one of many gun bills in motion in the Aloha State’s legislature.

The Land of Lincoln is one of eight states that ban suppressor ownership with bipartisan efforts by lawmakers in both 2015  and 2016 falling short of overturning the prohibition. A new push, SB 50, was filed last month and is assigned to the Senate Criminal Law committee.

While The Chicago Sun-Times’ editorial board published an op-ed piece arguing legalization of suppressors in Illinois would cancel out Shot Spotter technology used by police to track gunfire as it could not differentiate gunshots from suppressed firearms, a similar point was brought up in Minnesota in 2015. Shot Spotter refers to the debate on the company’s website, listing an article contending suppressors should not interfere with the detection system as long as the sound profile is entered in the scanner database.

Other than New York and California, Illinois is the most populous state in the country to ban the devices for other than law enforcement use. In nearby Pennsylvania, which shares a near identical population and enjoys no ban on compliant suppressors, there were 29,742 listed in the National Firearms Registration and Transfer Record as of February 2016.

Plymouth Democrat Rep. Josh Cutler pre-filed HD.1300, a safety act, for the upcoming legislative session to lift the ban on civilian use and ownership of suppressors. Two bills in the Senate have also been pre-filed to redefine the Commonwealth’s law on the use of firearm suppressors by criminals.

In an interview last year with SilencerCo CEO Josh Waldron, who advocates for greater acceptance of the devices, he said the Republican governors of both Massachusetts and Illinois have promised to sign legalization bills if lawmakers get them to their desks.

Speaking of hearing loss, the latest version of the Hearing Protection Act introduced to the new Congress last month, garnered its 83rd co-sponsor last week. However, suppressor manufacturers warn that it could be as far as a year away from passing if it is successful.