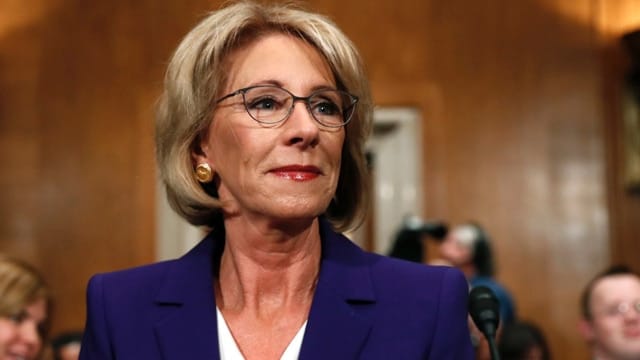 Betsy DeVos is an American billionaire, philanthropist and businesswoman who will serve as the next Secretary of Education. (Photo: CNN)

Many Americans expressed concern over putting DeVos in charge of the public education system due to her inexperience in public schools and her advocacy efforts to expand vouchers for private schools. But gun control groups also expressed concern for her failure to oppose guns in schools.

“Our kids deserve better than this – and like mothers everywhere, we will stop at nothing to make sure they are safe,” said Shannon Watts, founder of Moms Demand Action, in a statement to Guns.com.

Watts characterized the issue of guns in schools as “a dangerous gun lobby priority that endangers our children in the very place that should be a safe haven for learning.”

During last month’s confirmation hearing the billionaire philanthropist was asked directly if guns have a place in or around schools. She answered, “I think that’s best left to locales and states to decide,” and added that in rural areas like in Wyoming “there’s probably a gun in the school to protect from potential grizzlies.”

DeVos was then again pressed on the issue and was asked if she would support President Donald Trump if he followed up on his campaign promises to ban gun-free school zones.

“I will support what the president-elect does,” DeVos responded. “But, senator, if the question is around gun violence and the results of that, please know that my heart bleeds and is broken for those families that have lost any individual due to gun violence.”