6 Maryland residents take Baltimore, others to court over Taser bans 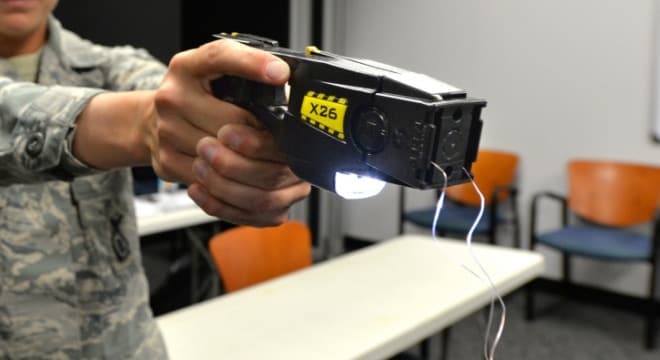 Six Maryland residents have filed a combined suit against their local cities and counties for the right to possess Tasers. (Photo: U.S. Air Force)

A group of Maryland residents seeking to legally own Tasers have filed suit in federal court seeking to overturn a series of local prohibitions against the devices.

The half-dozen plaintiffs in the case— Leah Elizabeth Baran, Lawrence McClain, Douglas S. Hansen, Stephen Schmidt, Daniel J. Carlin-Weber and Jon Fontaine — are suing Baltimore City and County and Howard County over their bans on the possession of electronic weapons. Under local ordinances, those caught with Taser or similar device face up to a $1,000 fine or imprisonment for as long as six months.

Baran, a Baltimore resident, is the survivor of an abduction and rape after an estranged boyfriend broke into her apartment and attempted to kill her by strangulation and blows to the head. Per court documents, her assailant’s last words to her were, “If I go to prison, as soon as I get out, I am coming for you and I am going to kill you.” Since then her home has been broken into in ways similar to the first incident and she has had numerous pets killed.

“Each plaintiff in the case is trained in firearms, owns guns, and are willing to use them in appropriate circumstances,” notes Washington, D.C.-based Arsenal Attorneys, the firm representing the case. One plantiff, McClain, is even a certified firearms instructor. “However, each plaintiff stated a desire to have available a non-lethal weapon to avoid using deadly force against an attack, if possible.”

Arsenal took the District of Columbia to task over their ban on Tasers last August winning a concession from the city the next month.

In that case and in the Maryland suit, Arsenal argues the Second Amendment extends “to all instruments that constitute bearable arms, even those that were not in existence at the time of the founding,” citing the 2008 Heller ruling as well as the more recent Caetano case.

In Caetano, the Massachusetts Supreme Judicial Court upheld the conviction of a woman who bought and used a stun gun in self-defense from an abusive ex-boyfriend, citing the device “is not the type of weapon that is eligible for Second Amendment protection” because it was “not in common use at the time of [the Second Amendment’s] enactment.” Last March the U.S. Supreme Court unanimously rejected the state’s argument.

The case is not the only one bringing a Maryland city to federal court. In January, an Annapolis man named the city’s mayor and police chief as defendants in a move to strike that city’s Taser ban law as being unconstitutional. Under city code, possession, or use of any electronic weapon, stun gun or any similar device is unlawful with exceptions for law enforcement.

Other cases are pending in New Jersey and Louisiana.