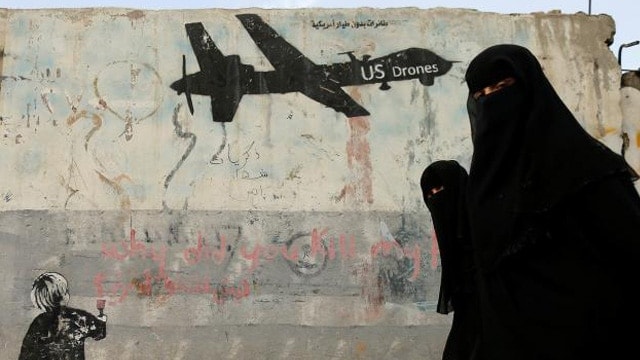 The “secret target” of the Jan. 29 raid was Qassim al-Rimi, the head of al-Qaida in the Arabian Peninsula, according to military officials who spoke to NBC News and CNN. Pentagon officials denied those reports Tuesday, as a new recording from al-Rimi surfaced.

“The fool of the White House got slapped at the beginning of his road in your lands,” al-Rimi said in an audio recording which was authenticated by the military.

A Navy SEAL was killed in the operation, as were several foreign civilians, including children. Despite the carnage, U.S. officials claimed the raid was a success, saying the operation yielded reams of valuable intelligence on al-Qaida. It’s not clear whether al-Rimi was at the site of the raid and escaped, or whether he was somewhere else altogether.

Pentagon officials on Tuesday denied the operation had anything to do with him. “There was never any intention, hope, anticipation or plan that he would be part of this operation,”  said Pentagon spokesman Navy Capt. Jeff Davis.

“There was no discussion of al-Rimi potentially being at that objective. We didn’t expect to see him there. We didn’t plan for him to be there, and this was not a raid that had anything to do with targeting that individual,” said Col. John Thomas, a spokesman for U.S. Central Command.

The conflicting reports come as criticism of the raid heats up. Yemen is in the midst of a complex two-year-old civil war, with several factions fighting one another following the fall of the former government — the Houthis, a Shi’ite Islamist movement which portrays Washington as an aggressor, as well as factions of al-Qaida and ISIS. The Houthis ousted government leaders in early 2015, launching the country into chaos. ISIS and al-Qaida militants have pounced on that chaos, launching their own attacks, and furthering the bloodshed. More than 10,000 people have died in the conflict.

The Obama administration backed the exiled Yemeni government, and didn’t actively fight opposition forces, instead working for a peace deal. Experts say last month’s raid played into the “Washington as aggressor” narrative, and is helping to fire up militants on all sides.

“Rather than advancing a political solution that almost everyone agrees is the only way to solve the conflict, it seems the Trump administration’s actions are just adding fuel to the fire,” said Adam Baron, an expert on Yemen, according to Reuters.

“It looks like the new President has watched a lot of Steven Seagal movies,” said a Yemeni tribal leader, talking about the SEAL raid.

“This raid marked the first time the United States has put boots on the ground in combat in the Yemeni civil war, and those SEALs were sent into the line of fire without constitutionally-required authorization from Congress,” said Bonnie Kristian in an op-ed for Business Insider.

“Obama started US involvement in Yemen secretly and illegally, and to escalate to ground war—to putting US troops in harm’s way—without so much as a go-ahead from Congress would be a serious mistake,” she continued.