Report: ‘Stopping immigration from Islamic countries won’t prevent support for ISIS in the US’ 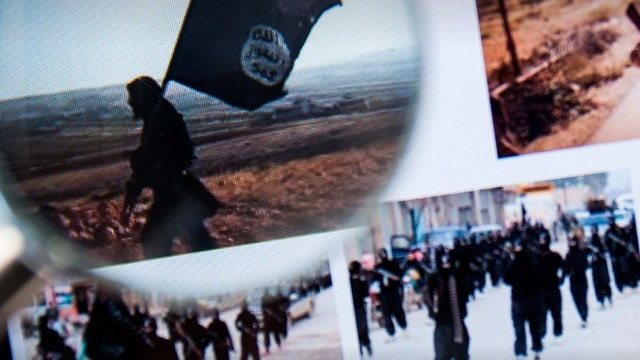 ISIS propaganda and recruiting efforts deserve a serious look from policymakers, according to a new report. (Photo: Australian Strategic Policy Institute/Chicago Project on Security and Threats)

While the fate of President Donald Trump’s stalled, temporary travel ban of seven Muslim majority nations plays out in court this week, a study released earlier this month points to a different source of terrorism — radicalization on American soil.

During a press briefing Wednesday, a reporter asked White House press secretary Sean Spicer, “What is being done about people who are being radicalized in the basement in front of the computer screen … who are not affected by this ban?”

As the focus of America’s discussion on terrorism in recent weeks has swirled around the president’s controversial executive order, the reporter’s question points to an altogether different front in the so-called war on terror.

“The terrorist threat to America is changing,” said Robert Pape, the director of the Chicago Project on Security and Threats at the University of Chicago. “New data show how the threat comes almost exclusively from American citizens already within our borders, not refugees or foreign nationals.”

Working with the Australian Strategic Policy Institute, Pape and his team published the study, “The American Face of ISIS,” earlier this month. One of its chief policy takeaways is that “stopping immigration from Islamic countries won’t prevent support for ISIS in the US.”

Researchers looked at 104 people who were indicted by the Department of Justice for ISIS-related crimes from March 2014 to August 2016. They also studied eight people who died while carrying out an attack for ISIS on U.S. soil, or fighting for ISIS in Syria. 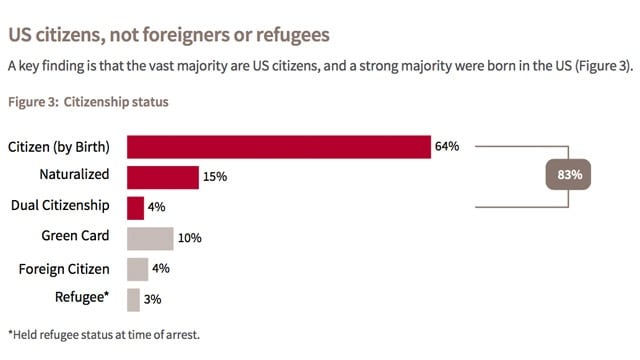 Most of the 112 people studied were U.S. citizens – only three were refugees. (Photo: Australian Strategic Policy Institute/Chicago Project on Security and Threats)

“The common perception of a terrorist as a young, single, unemployed, disenfranchised male is wrong,” reads the report. “The average age of the 112 individuals is 27 years old, with almost a third over 30; more than 40 percent were in a relationship, with a third being married; while nearly two-thirds had been to college.” 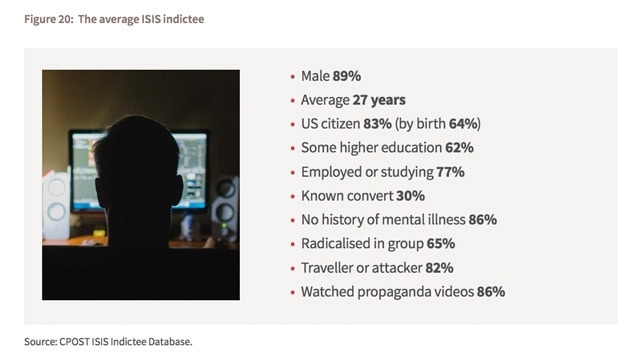 A look at the average ISIS indictee studied in “The American Face of ISIS.” (Photo: Australian Strategic Policy Institute/Chicago Project on Security and Threats)

“A typical example is Edward Archer, arrested for shooting and almost killing a police officer in Philadelphia after pledging allegiance to ISIS,” the report continues. “A US-born citizen and lifelong U.S. resident, Archer was radicalized not by traveling to Syria or Iraq, but by ISIS propaganda or by ISIS operatives via social media.”

Researchers were able to gather data on propaganda consumption for 87 of the 112 people they studied. Of those 87 people, 84 percent of them reported watching videos made by extremists — most of them produced by ISIS — and 53 percent said they’d watched execution videos.

The terror organization has released dozens of high-quality videos on the internet in recent years. In addition to videos showing executions, there are lectures by terror leaders and “recruitment videos targeting Western audiences” which include “appeals to sympathizers in the West to attack targets where they live,” according to the report.

The researchers say this is what policymakers should be focusing on.

Answering the reporter’s question Wednesday about what’s “being done about people who are being radicalized in the basement,” Spicer said the president is “ looking at working with the FBI and domestic intelligence agencies to gather the best information we can to prevent acts on our soil from people, wherever they may be.”

“So something more is being done on that front that we haven’t heard about?” clarified the reporter.

“We’re not looking at this myopically and just saying ‘these are the seven countries,’” said Spicer. “The president has looked at options within the domestic intelligence gathering to figure out whether it’s cyber or other ways that we can determine other ways to prevent or get ahead of additional threats that we might face in this country. But it’s not an either/or proposition. It’s a whole-of-government approach to what’s going on.”

For Pape, the conclusions in his study have him hoping officials are indeed working to understand ISIS’s propaganda strategy, and are targeting the terror group’s methods of recruitment and homegrown radicalization.

“Above all, we must not play into their hands by confirming their twisted narratives,” he said.