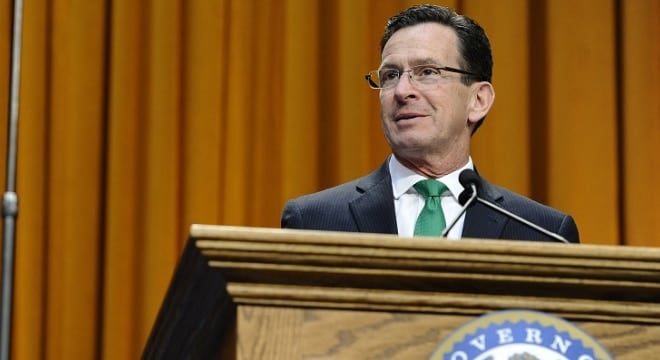 In an effort to trim Connecticut’s budget deficit, Gov. Dannel Malloy is seeking to more than quadruple the state’s fees for handgun permits.

The current initial fee for a pistol permit is $140 and $70 for a renewal every five years. While local authorities keep $70 of the initial fee, Malloy’s proposal announced this week would see the state’s portion climb to $300, making new permits $370 and renewals $300.

“Together let’s ensure that all Connecticut communities see their fair share of success,” Malloy said in his budget address. “Let’s give taxpayers, communities, and businesses more predictability and more sustainability.”

In justifying the increase in permit costs, Malloy outlined that sweeping gun control reforms he signed into law in 2013 have “led to an increased demand for gun permits and thus an increased workload” for state officials processing background checks, permits and certificates.

The fee change is projected to increase revenues for the state by $9 million each year. Malloy further wants to see the fee charged for background checks rise from $50 to $75. This would add another $2.6 million in revenue to the state’s coffers annually. As a background check is mandated to obtain a gun permit, those seeking an initial license could expect to pay $445 in fees for a five-year permit if both increases are approved. This is in addition to costs associated with mandated training.

The budget’s proposed outlay for the Board of Firearms Permit Examiners is $113,272, down from $123,000 in 2016. Malloy also intends to trim 161 positions from the Department of Emergency Services and Public Protection — the agency that oversees the state police and gun permitting.

Among other fee increases proposed by Malloy would be to raise land recording filings from $3 to $10 and cremation certificates from $150 to $200, though none are expected to produce the additional revenue that the gun permit hike will. In all, Malloy is attempting to close a $1.7 billion budget gap.

The National Rifle Association decried the proposed increase, arguing it will make the exercise of Constitutionally-protected rights financially out of reach for some.

“While this increase represents a drop in the bucket for the state’s treasury, it will be very burdensome for ordinary citizens who wish to exercise their Second Amendment rights,” the group said in a statement. “Law-abiding gun owners in Connecticut already have to bear excessive costs and a redundant bureaucratic process that is designed to dissuade them from exercising their constitutional Right to Keep and Bear Arms.”

Budget negotiations between Malloy’s office and state lawmakers are expected through the next several weeks.