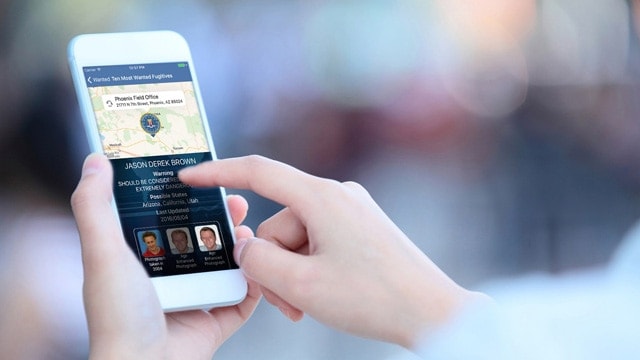 The FBI Wanted app is the third app developed by the Bureau. (Photo: FBI)

The Federal Bureau of Investigation launched a mobile application Monday aimed at helping to capture more fugitives by making it easier for individuals to access information and submit tips.

At the touch of a screen, the FBI Wanted app will allow the public to view, search, sort, filter, and bookmark information provided by the Bureau, including photos and descriptions of wanted fugitives, as well as missing persons, crime suspects, deceased victims, or anyone else the Bureau is attempting to either locate or identify.

“Since the earliest days of the Bureau—when wanted flyers were tacked to post office walls—the public has played a vital role in helping the FBI and its partners locate criminals on the run and solving cases of all kinds,” said Christopher Allen, head of the Investigative Publicity and Public Affairs Unit in the FBI’s Office of Public Affairs. “This app is designed to put another digital tool in the hands of concerned citizens so they can help protect their families and communities.”

The app, which is free on both Apple and Android devices and can be downloaded from the Apple App store or Google Play, was designed with a simple user interface that makes it fast and easy to use. The app can also be personalized to display information that the user finds most relevant or interesting by accessing a whole host of search and filtering functions.

The Wanted app is the third mobile application designed by the FBI. Child ID, which was the Bureau’s first app, was launched in 2011 and has since been downloaded nearly 350,000 times. It gives parents the ability to store photos and other vital information to be immediately accessed in the event their child goes missing. The FBI Bank Robbers app was released in August 2016 and provides access to information about less publicized violent and serial robbers who are wanted by the FBI.

“Thousands of cases have been solved over the years thanks to the watchful eyes of concerned citizens, and that has made the country a safer place for all of us,” Allen said. “The FBI Wanted app will help carry on this tradition of partnership. We encourage everyone to download it and report any pertinent tips to the FBI.”