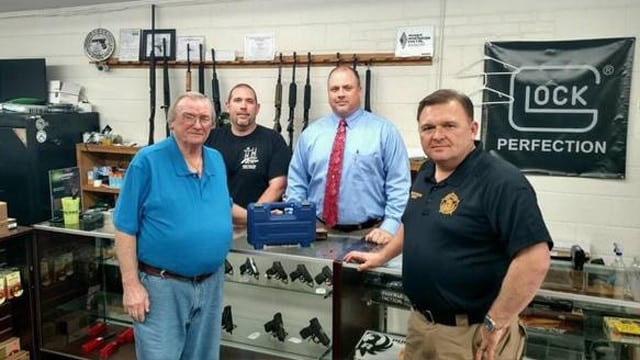 A restaurant manager who turned the tables on armed robbers last week in Dublin, Georgia, was given a new gun by a local gun shop after his was confiscated by law enforcement.

The shop, CL Defense, gave Billy Harrell a new Smith & Wesson .38 Special on Wednesday after hearing that he was temporarily unarmed as investigators needed to test his two guns for their investigation.

Telfair County Sheriff Chris Steverson, who highlighted the random act of kindness on social media, commended the 66-year-old for his actions, saying he “did a good thing.”

He explained that both of Harrell’s guns will be held until the suspects’ court dates as one gun may have a perpetrator’s DNA or fingerprints and the other will be matched to the bullet that struck the second suspect.

“Being proud advocates for ensuring our ability to exercise our 2nd Amendment rights, and believing in the right of law abiding citizens to use a firearm for protection, CL Defense notified me that they will be happy to provide a brand new weapon, free of charge to this citizen so that he will continue to have the means to protect himself. Boy, Ain’t that America!” Steverson said.

The revolver retails for around $400, but it was given to Harrell free of charge. Harrell, who holds a valid firearms license, picked up the new .38 Special Wednesday.

According to authorities, the robbery attempt occurred on Feb. 3 when Harrell was getting ready to close up the Ole Times Country Buffet. The suspects approached him around 7:30 p.m. as he walked to his SUV in the parking lot.

The suspect demanded Harrell’s money, but Harrell informed him that he had none. The suspect then forced Harrell to sit in his vehicle as he rummaged through the console and glove box. In the vehicle, the suspect found a pistol owned by Harrell and some other valuables.

The suspect took the loot and started to walk away, but then turned around and aimed a gun at Harrell. What the suspect didn’t know at the time was that Harrell had a second gun stashed in his vehicle and retrieved it when the suspect’s back was turned. Staring down the barrel of the suspect’s gun, Harrell fired a single shot, striking the suspect, who immediately fled from the scene.

Responding officers located the second suspect, 22-year-old Quantavis Jones, not far from the restaurant. A short time later, the first suspect, 21-year-old Devin Wilbert, showed up at an area hospital suffering from a gunshot wound. Both suspects were arrested and remain behind bars on charges of armed robbery and aggravated assault.

Harrell, who Ellis said was very appreciative of the new revolver, was not injured.

Authorities say they have reason to believe Jones and Wilbert were involved in an armed robbery at a convenience store last month.