Unveiled at SHOT Show in January by AR accessories maker Hardened Arms, the design is gaining steam and attention for its fresh take on mounted lighting. The LumaShark system merges an AR-15 handguard with dual 1150 lumen Cree lights for an all-in-one package.

Weighing 22 ounces, the 12-inch handguard is made of durable aluminum which is also waterproof. The system uses standard or rechargeable CR123A batteries, readily available at most retail stores. 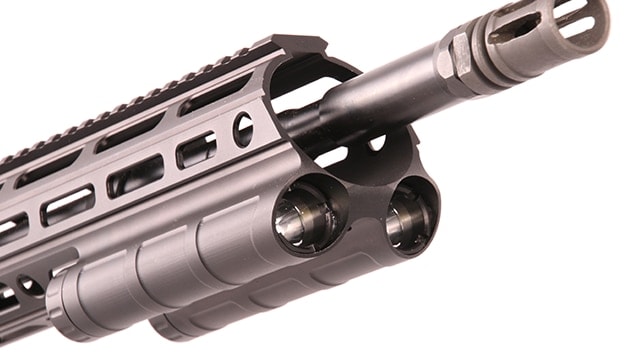 Hardened Arms says the lighting system is geared toward both civilians and law enforcement.

“This lighting system is made to provide not only illumination on the darkest of nights but also to aid law enforcement when they need to light up a suspect and disrupt the intent cycle,” the company’s website says.

The LumaShark is available now and ships with a barrel nut, the LumaShark handguard, glove hand buttons and batteries. The package retails for $399.99.