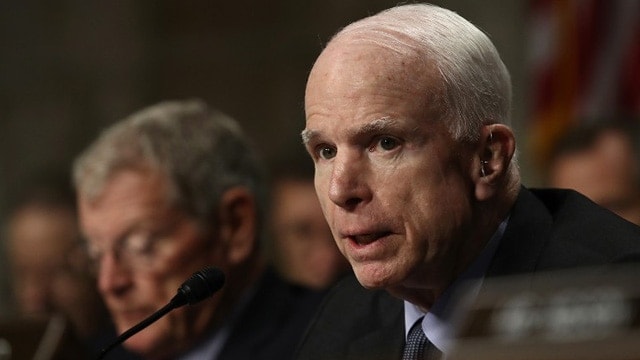 Arizona Sen. John McCain said the raid was carried out to “kill the bad guys, but also capture some of them.” (Photo: Win McNamee/Getty)

President Donald Trump on Thursday unleashed a tweetstorm against Arizona Sen. John McCain after the senator said the objective of a raid in Yemen late last month was to kill or capture terrorists, something the Pentagon denied earlier in the week.

A Navy SEAL was killed in the Jan. 29 raid, as were several foreign civilians, including nine children. Still, the White House called the operation a success, saying valuable intelligence was gathered. On Tuesday, several reports claimed the raid was deployed in an effort to kill or capture members of al-Qaida, something the Pentagon denied. But McCain, who chairs the Senate Armed Services Committee and was briefed on the raid this week, confirmed the earlier reports.

“My understanding of the parameters of the raid were, they wanted to capture individuals,” McCain told NBC News. “The objective was to kill the bad guys, but also capture some of them.”

On Thursday morning, Trump took to Twitter to bash the longtime senator.

“Sen. McCain should not be talking about the success or failure of a mission to the media. Only emboldens the enemy!” wrote Trump.

Sen. McCain should not be talking about the success or failure of a mission to the media. Only emboldens the enemy! He's been losing so….

…long he doesn't know how to win anymore, just look at the mess our country is in – bogged down in conflict all over the place. Our hero..

..Ryan died on a winning mission ( according to General Mattis), not a "failure." Time for the U.S. to get smart and start winning again!

Meghan McCain, daughter of the Arizona Republican, weighed in Thursday, saying, “Trump has never served. My father can’t bend one of his knees or lift one of his arms above his head. I am done with this today. DONE.”

Trump has never served. My father can't bend one of his knees or lift one of his arms above his head. I am done with this today. DONE.

“Several of [the Trump tweets] cracked me up,” McCain said Thursday, according to Fox News. “I can’t comment on what the president does and I won’t, but one of the things I’ve learned over the years here — frankly, one of the guys I learned this from was Ted Kennedy — he said you can ferociously defend your position or take the offense, but not get personal and you can move onto another issue or move on.”

“I’ve tried to move on in the senate,” McCain continued. “I haven’t always succeeded because of my temper, but generally speaking … I love to argue this … people I disagree with, I just don’t get personal with it.”

The raid sparked outrage in war-torn Yemen, where officials called it a “failure,” according to Newsweek. The Yemeni government denied claims that they’d banned future U.S. ground operations. Still, people are hurting.

“If such slaughter happened in their country, there would be a lot of shouting about human rights,” said Zabnallah Saif al Ameri, a Yemeni man who lost nine members of his family in the raid. “When our children are killed, they are quiet.”