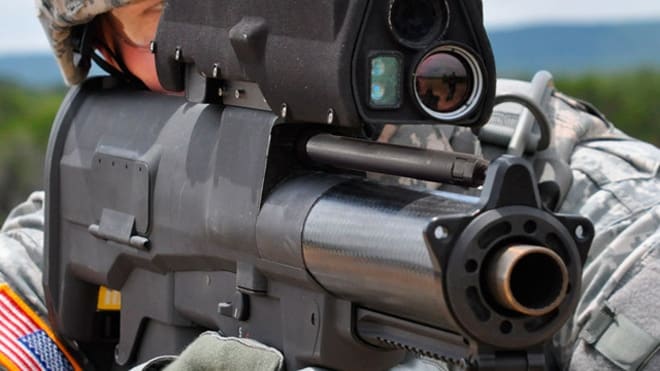 ATK hired the German company as a subcontractor more than two decades ago and paid it more than $35 million to manufacture the XM25 “smart” weapon, but the gun maker missed last year’s deadline for completing the final order, the lawsuit says.

According to the complaint, Heckler & Koch failed to submit 20 prototype weapons needed in May, claimed the deadline was in September, and then abruptly excused itself from the contract entirely by citing a 19th Century law.

“H&K obtained a legal opinion from a German lawyer positing that the XM25, as designed, could theoretically be used in a manner that violated international laws of war,” the lawsuit says, noting Heckler & Koch referenced the St. Petersburg Declaration of 1868, a treaty that bans projectiles of a certain weight to be used against people.

But the lawsuit says ATK’s contract with the U.S. Army states the XM25 would not be used to target enemies in “a non-defilade position.” The complaint defines “defilade” as combatants “entrenched in a protected position,” and says facing it is “one of the most dangerous positions in which a U.S. soldier can find himself or herself.”

According to the complaint, the XM25 was designed so a soldier could shoot 25mm “airbursting” rounds from his shoulder and ideally reduce reliance on artillery, mortars and air support when fighting enemy combatant in defilade.

“The XM25 is a ‘smart’ weapon that measures the distance to the enemy combatant’s protective barrier, then programs the round to detonate only once it reaches the programmed distance,” the lawsuit says.

Details about the XM25 project have been circulating for more than a decade and the weapon was reportedly field tested by U.S. troops fighting in Afghanistan, but the project suffered budget cuts in 2013. Last summer, the DoD Inspector General’s Office released a report recommending the Army either end the XM25 project or complete it in the fall after spending an estimated $185 million.

ATK has asked the court for a $27 million award — a sum devised from the cost to procure the contract, and develop and produce the weapon — and to allow the company to transfer intellectual property to another company to fulfill orders.