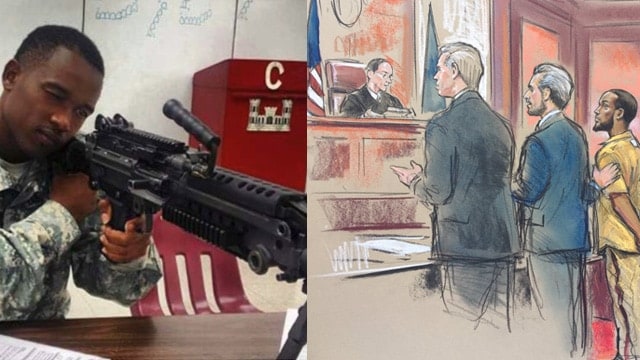 A former member of the Army National Guard was sentenced Friday to 11 years in prison for attempting to provide material support to ISIS.

Mohamed Bailor Jalloh, 27, of Sterling, Virginia, is a naturalized U.S. citizen from the West African nation of Sierra Leone. He was arrested in July after spending several months talking to a federal informant about terrorist plots, eventually sending along $500 intended for an ISIS fighter, and then buying a Stag Arms SAl 5.56 caliber rifle – a purchase that prompted his arrest.

According to the Department of Justice, Jalloh was introduced to the FBI informant in March 2016 by a member of ISIS. He told the informant he quit the Virginia Army National Guard after listening to lectures by Anwar al-Awlaki, an American born leader of Al-Qaida in the Arabian Peninsula who was killed in a 2011 U.S. drone strike in Yemen.

“Jalloh was first introduced to (al-Awlaki’s) lectures after hearing the news media refer to (al-Awlaki) as a ‘hate preacher,’” reads an affidavit filed in July. Jalloh told the informant it was al-Awlaki’s lectures that made him realize “it was a duty of every able Muslim to resist the American presence and activity in Iraq and Afghanistan.”

At one point, Jalloh told the informant he “thinks about conducting an attack all the time,” and said he wanted to plan something similar to the 2009 terror attack at a military base in Fort Hood that left 13 people dead and 32 more injured. The man behind that attack, Nidal Hasan, was a military psychiatrist who was found to be communicating with al-Awlaki before the attack.

“Nidal Hasan type of things,” Jalloh told the informant as they talked about a potential attack. “That’s the kind of stuff I started thinking you know.”

Talking in May of last year, Jalloh told the informant such attacks are “100 percent the right thing.”

“Sometimes you just have to take action,” he said. “You can’t be thinking too much. You have to pick a action and take it cuz time is not on your side.”

Soon after that, Jalloh sent $500 to an undercover FBI employee, thinking the money was going to support ISIS. In June 2016, he travelled to North Carolina to try to buy guns, but failed. On July 1, Jalloh went to a gun shop in Chantilly and tried to buy a Bushmaster AR-15, but he didn’t have the proper forms of identification, according to court documents. He returned the next day, test fired the Stag Arms rifle, and purchased it, though the FBI had by that time been involved and the weapon was rendered inoperable. He was arrested the next day.

Jalloh will have five years of supervised release when his 11 year sentence is complete.