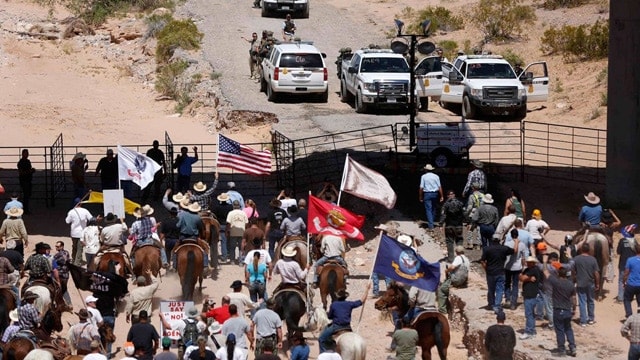 Protesters, in support of Cliven Bundy, face off with officials from the Bureau of Land Management in April 2014 near Bunkerville, Nevada. (Photo: Associated Press)

A judge ordered the name to be released of the federal who was under investigation for misconduct and ethics violations and believed to be the supervising agent in charge during the 2014 standoff between Nevada rancher Cliven Bundy, his supporters, and Bureau of Land Management officials.

According to reports, Bundy’s defense team accused the government of withholding valuable evidence directly related to the case, as the agent they believed to have been under investigation, Daniel Love, is a key witness for the prosecution. If it’s determined that Love, who was the BLM special agent in charge for Utah and Nevada between 2012 and 2015, was the agent under investigation, his testimony will likely become null.

The defense already moved to have charges dismissed against the 17 defendants facing conspiracy and other charges for their involvement in the standoff, citing the misconduct allegations, which were discovered when the Department of Interior’s Office of the Inspector General released a copy of the report on Jan. 30. However, Judge Gloria Navarro denied the motions.

“The OIG Report details several violations of federal ethics regulations, misuse of government property, misuse of a government position, and ‘a lack of candor when interviewed,'” Navarro wrote in a ruling Wednesday. “At a minimum, (defendants) may use this alleged misconduct on cross-examination to impeach (the agent).”

The report did not specifically name the agent under investigation, but Bundy’s attorney, Bret Whipple, claims there was enough information given in the report to identify the agent as Love. Whipple said they should have been given the information “years ago.”

Whipple, who accused the government of not just withholding, but purposely hiding the investigation, noted that the report demonstrates Love’s long-time misconduct and abuse of power. The defense has long argued that Love intentionally tried to escalate the situation during the standoff as a means to advance his career.

“It gives value to our concern that there was government overreach,” Whipple added.

According to the report, the agent under investigation wrongfully used his position in order to obtain benefits for himself and family members during the annual Burning Man festival in 2015. The agent is also accused of unlawfully using government resources and manipulating the BLM hiring process in order to help his friend get a job when there were other, more qualified applicants.

The Bundy trials, which began last week, are considered to be one of the most high-profile land-use cases. The standoff occurred as BLM agents moved in to seize Bundy’s cattle. As part of the 20-year dispute, officials say Bundy owes more than $1 million in grazing fees, while Bundy, who refuses to pay the fees, argues the fees don’t apply to the use of public land.