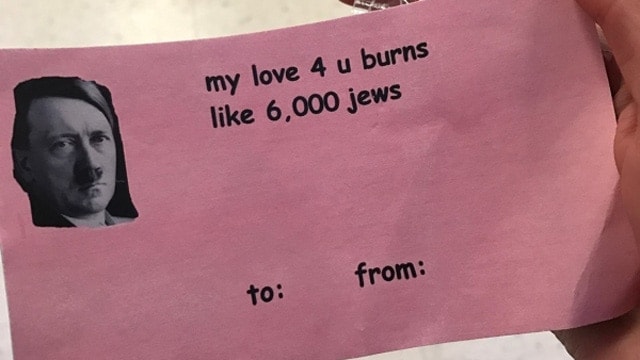 A handmade Valentine card with a photo of Adolf Hitler and a Jewish holocaust-themed pun that turned up during a Valentine’s Day party at Central Michigan University last week left staff and students alike a little more than upset. But while blame was immediately placed on the College Republicans, the student group said they were not responsible.

In a statement posted to Facebook following the fiasco, the College Republicans explained that during the party each member had a decorated bag in which other members placed Valentine’s cards. Those bags were then handed out to other students. The group said they had no knowledge of the card and did not – or least not intentionally – distribute it.

“We in no way condone this type of rhetoric or anti-Semitism,” they added. “We apologize for any offense, and want students to know that we do not tolerate this sort of behavior.”

Kirsten Simmons, a spokeswoman for Central Michigan University, said the administration is “deeply disappointed” by the incident and they are working to determine where the card came from.