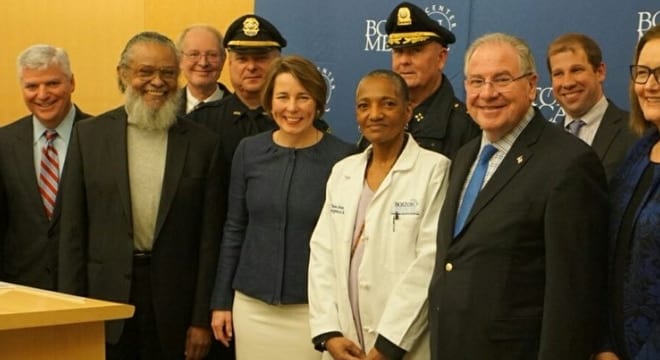 State Attorney General Martha Healey teamed up with the Massachusetts Medical Society on Monday to provide voluntary guidance to heath care professionals in the state on guns.

Announced at Boston Medical Center, Healey and Mass Med are providing two pamphlets and free training on talking to patients about firearms.

“While the vast majority of gun owners are responsible and deeply committed to gun safety, this remains a public health issue, and conversations between patients and health care providers are critically important to preventing gun-related injury and death,” said Healey in a statement.

Compiled as a result of a yearlong effort by the attorney general’s office, Mass Med, and two police chief lobby groups, the literature developed for the program includes a four-page pamphlet for patients covering Massachusetts safe storage laws while touching on disposing of unwanted guns and suicide prevention.

Another two-page pamphlet, directed at health professionals, concerns how to talk to their possibly at risk patients about guns and offers suggestions.

“For example, rather than advising a patient to get rid of a gun, you could suggest that there are a number of different ways to make guns less accessible, ranging from selling/surrendering the gun, to disposing of ammunition, to temporarily storing the gun outside the home,” one suggestion reads.

Mass Med hosts both the literature and other resources, some of which count as continuing education for health care professionals.

“Gun violence is a major public health threat,” said Mass Medical President James S. Gessner, M.D., “and physicians can play a key role in curbing the violence by educating patients about the risks of gun ownership and encouraging our colleagues to talk to their patients.”

The prospect of gun control as a public health issue has proven controversial in recent years with several medical lobby groups banding together to fight a Florida law preventing conversations with patients on their firearms. A 2016 survey published by The Annals of Internal Medicine argues two-thirds of Americans are OK with doctors discussing guns.

The National Rifle Association’s affiliate group in the state contended via social media that the move by Healey and Mass Medical was “dishonest grandstanding” while pointing out the gun safety pamphlet contains no actual NRA-recommended firearms safety “golden rules.”

Mass Medical, for its part, also took to social media, tweeting out the link to the new materials with the tagline, “Learn how to talk to your patients about gun safety.”

Learn how to talk to your patients about gun safety. More here: https://t.co/xeU7p85ubg… https://t.co/wShgvkit55