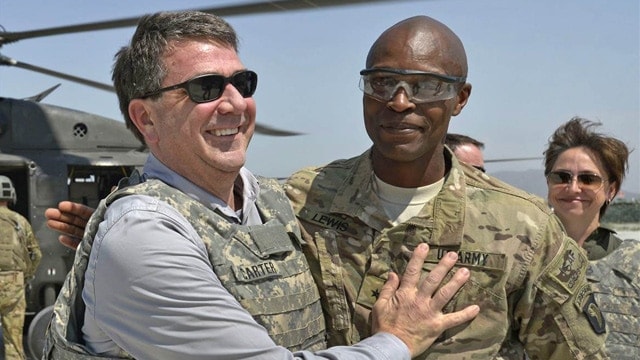 A former three-star general who once served as a top military aide for the Department of Defense was demoted last week after a report revealed that he charged thousands of dollars to a government credit card at strip clubs overseas.

Major Gen. Ronald Lewis, who was previously the senior military assistant to former Defense Secretary Ash Carter, will retire as a brigadier general, the Army confirmed Thursday, according to NBC News.

Lewis was previously a three-star lieutenant general but was demoted to major general more than a year ago after he was fired by Carter when allegations of the credit card misuse — as well as Lewis’ involvement in an extramarital affair — came to light.

“I expect the highest possible standards of conduct from the men and women in this department particularly from those serving in the most senior positions. There is no exception,” Carter previously said in a statement.

A report by the inspector general showed that Lewis “engaged in conduct unbecoming an officer and a gentleman on multiple occasions.”

According to the report, Lewis charged more than $1,100 at the Candy Bar strip club in South Korea and nearly $1,800 at the Cica Cica Boom strip club in Rome. Both clubs are said to have a reputation as a hotspot for prostitution, although it’s unclear if Lewis engaged in such activity. After the charges were placed on the credit card, Lewis apparently reported the card stolen, which led the bank to forgive the charges.

In addition, Lewis, who was said to have drank in excess while in the company of junior officers, was found to have engaged in inappropriate relationships with female subordinates.

All of the questionable acts occurred while Lewis was still working with Carter.

Under federal law, military officers can retire only with the rank they last served satisfactorily.

“In this case, the Secretary determined that Maj. Gen. Lewis’ highest grade of satisfactory service was as a Brigadier General,” Army spokeswoman Cynthia Smith said in a statement.