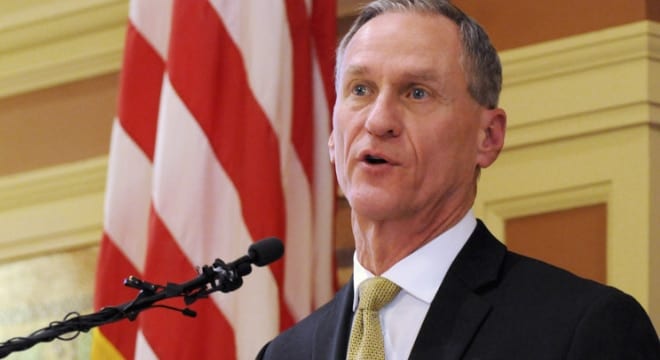 South Dakota Gov. Dennis Daugaard vetoed a bill in 2012 that would have allowed for concealed carry without a permit and is promising to do the same if given the opportunity. (Photo: James Nord/AP)

Republican Gov. Dennis Daugaard says he will again reject permitless carry legislation if it reaches his desk as a House bill to bring constitutional carry to the state is set for hearings this week.

Daugaard, who shot down similar legislation before, feels HB 1072 is bad legislation that is not needed due to the what he describes as the state’s minimal and effective permitting system.

“House Bill 1072 would eliminate the permit requirement in order to carry a concealed weapon,” wrote Daugaard in an op-ed published by the Rapid City Journal. “Under this bill, the vetting process would be removed. Individuals with a proven history of violence or substance abuse and those who have been identified as a danger to the public or to themselves could not be restricted from carrying a firearm.”

There were some 96,047 permits in circulation as of the end of 2016. Open carry without a permit is legal.

“Legal gun owners should be able to carry their gun the way they choose, without ‘buying back’ their constitutional right,” argues DiSanto, whose bill has the support of the National Rifle Association and other gun rights groups.

In 2012, Daugaard vetoed a similar permitless carry bill at the urging of the South Dakota Sheriffs Association. The lobby group was key in defeating another attempt at constitutional carry in 2015.

DiSanto’s proposal is set to be heard by the House State Affairs committee on Wednesday and has 27 co-sponsors in the GOP-controlled chamber.

State Sen. Lance Russell, R-Hot Springs, has filed a similar bill in the Senate, SB 94, which has four co-sponsors.