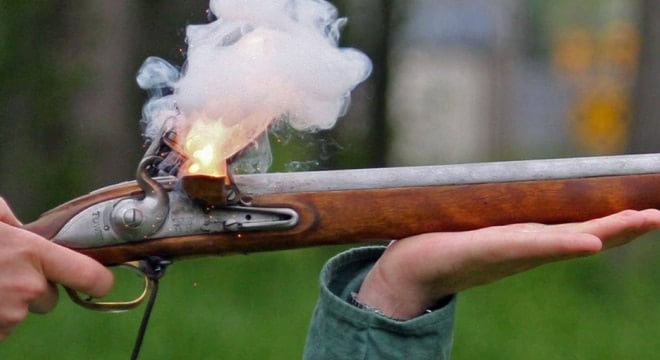 Virginia classifies antique firearms as replica muzzleloaders or any firearm with a matchlock, flintlock, percussion or similar ignition system, or those manufactured in or before 1898, or fire ammunition that is no longer manufactured. (Photo: National Park Service)

Lawmakers in the Virginia House of Delegates on Tuesday gave their approval to a Senate plan allowing some with felony records to use guns such as muzzleloaders for limited reasons.

The legislation, which would allow the use of narrowly defined antique firearms for sporting, recreational, or cultural purposes, passed the House 94-4 and goes back to the Senate to approve changes made by the lower chamber.

Though the measure won wide bipartisan support, some questioned the need for the move.

“Are there lots and lots and lots of felons that are missing out of the opportunity to carry antique firearms?” Del. Marcus Simon, D-Fairfax, asked.

Supporters argued the proposed change would allow participation in hunting and Civil War reenactments among other activities, proving reformed individuals an opportunity to better reintegrate into society.

The bill as approved would allow felons who had not been convicted of violent acts to possess antique firearms and up to five pounds of black powder or its equivalent.

Virginia classifies antique firearms as replica muzzleloaders or any firearm with a matchlock, flintlock, percussion or similar ignition system, or those manufactured in or before 1898, or fire ammunition that is no longer manufactured. Current law does not allow for an exception for prohibited firearms possessors to use such guns.

Although Gov. Terry McAuliffe recently moved to restore the civil rights of 200,000 felons, the Virginia Supreme Court found he overstepped his authority and many of those individuals are in limbo when it comes to petitions to restore gun rights.

While federal law allows prohibited firearm possessors to receive or use antique guns such as muzzleloaders, many states have local bans. In 2016, the Florida Supreme Court overturned the conviction of a man for being a felon in possession of a firearm because the gun he was found using during hunting season — a percussion muzzleloader — wasn’t considered modern under state law.