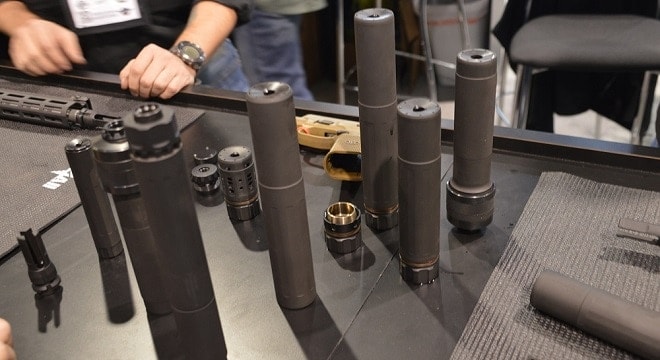 The latest version of the HPA, tracking for just over a month, has gained more supporters than the original filed with the last Congress. (Photo: Chris Eger/Guns.com)

A bill that would remove suppressors and silencers from National Firearm Act regulations is picking up momentum on Capitol Hill.

The Duncan-Carter Hearing Protection Act was introduced by GOP sponsors U.S. Rep. Jeff Duncan of South Carolina and Rep. John Carter of Texas last month and aims to deregulate suppressors as a safety measure to help promote their use in protecting hearing. Enrolled as H.R. 367, the measure picked up its 100th co-sponsor on Tuesday and another Wednesday.

The news came just after an internal policy paper by Associate Deputy Director and Chief Operating Officer for the Bureau of Alcohol, Tobacco, Firearms and Explosive, Ronald Turk became public, decrying the current level of suppressor regulation and noting they were only rarely used in crime.

“The ATF’s research underscores why the Hearing Protection Act is so important – suppressors clearly go a long way in protecting the hearing of Texas sportsmen and firearm owners across the nation,” noted Rep. Carter in a statement. “This is common sense legislation that cuts back on burdensome, outdated regulations on an accessory that protects an individual’s hearing.”

Since 1934, the federal government has treated devices designed to muffle or suppress the report of firearms as Title II devices that required registration under the National Firearms Registration and Transfer Record and mandated transfers that included a $200 tax stamp. The Duncan-Carter bill and its Senate companion filed by Sen. Mike Crapo would repeal this requirement and treat suppressors as firearms – which would allow them to be transferred through any regular federal firearms license holders to anyone not prohibited from possessing them after the buyer passes an FBI instant background check.

A similar bill, introduced in 2015 by Arizona Republican Matt Salmon, gained 82 co-sponsors on both sides of the aisle but never made it out of committee despite being one of the most-viewed bills on Congress.gov last year.

Suppressor advocates welcomed the news of the important milestone but cautioned the bill still has an uphill climb.

“Reaching 100 cosponsors in the House clearly shows that the HPA has a tremendous amount of support, but there is still a lot of work to be done to get it to the President’s desk,” said Knox Williams, president and executive director of the American Suppressor Association. “We are working very hard with Representatives Duncan and Carter, and Senator Crapo to turn this legislation into law as quickly as possible; however, it’s going to take time.”

Gun control groups are opposed to easing restrictions on the devices with the Violence Policy Center contending expanding their availability is dangerous.

The group argues in a policy paper that “the campaign to deregulate silencers is merely the latest attempt by the gun lobby and gun industry, in the wake of declining household gun ownership, to market yet another military-bred product with little concern for its effect on public safety.”