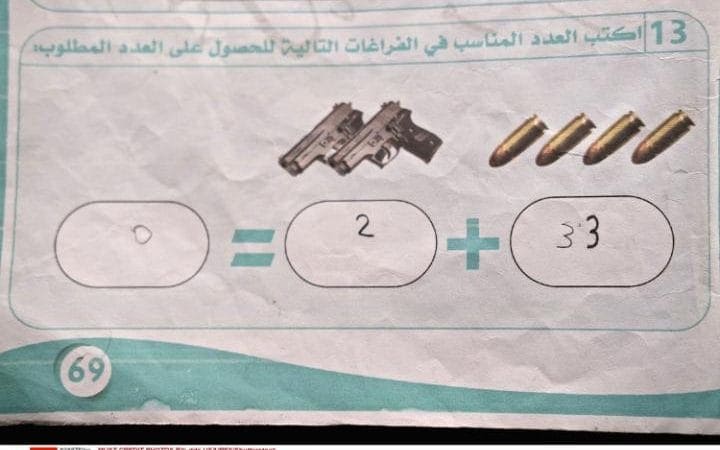 Example of a math problem found in an ISIS school textbook (Photo: REX via The Telegraph)

Photos have emerged of an Islamic State textbook in which pictures of guns and tanks are used to teach children math.

The Telegraph reports the first grade textbook was found in an elementary school in the eastern Al Muthana district of the war-torn Iraqi city of Mosul.

The textbook contains math problems and equations using tanks, Kalashnikov rifles, military trucks and ISIS flags. The school where it was found was reportedly occupied by ISIS fighters, who ordered teachers to use their textbook.

Nikita Malik, member of counter-extremism think tank Quilliam, told the Daily Mail that the brainwashing of children “is a three-stage process” for ISIS.

“First of all, they normalize violence for them, and then they expose them to things like executions and beheadings, and then get them to do physical training,” Malik said.

“They see children as assets you invest in, so that you can turn them into ‘pure soldiers’.”

Quilliam has also warned the Telegraph that refugee children are being recruited by the Islamic State before they head to Europe.