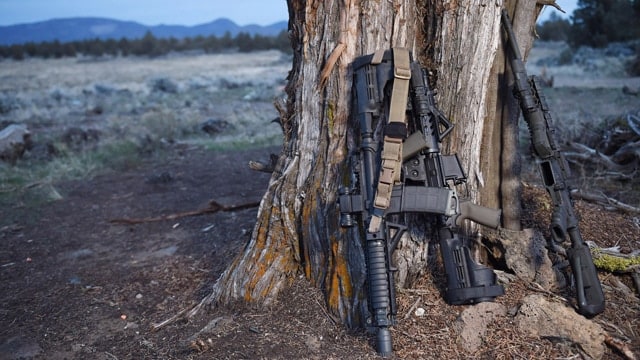 Civilian groups that make up the so-called Patriot movement are on the decline and the trend is likely to continue under President Trump, according to a report released Wednesday from the Southern Poverty Law Center.

The Patriot movement is comprised of people who pledge to defend the Constitution and expect the federal government to do the same. Some are preppers, some are heavily armed, and all of them want their liberties upheld. The SPLC, a progressive civil rights advocacy organization, characterizes the movement as part of the “radical right” — an “anti-government” faction that thinks the government is “plotting to deprive Americans of their liberties.”

In a report on hate and extremism released this week, the SPLC said the number of Patriot groups fell by 38 percent — from 998 groups in 2015 to 623 groups last year. Militias, which form the armed wing of the movement, fell 40 percent, from 276 to 165 groups, the report shows.

Compare that to 2011, when SPLC tracking found that Patriot groups numbered more than 1,200 during President Obama’s first term. The report points to a trend wherein Patriot movement membership swells during Democratic administrations, and declines under Republicans — a trend SPLC analysts believe will mean a continued decline in  membership during the Trump administration. 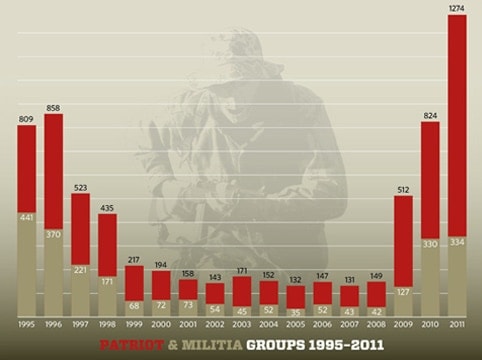 “Trump’s co-optation of some of the Patriot movement’s key issues — resistance against any kind of gun control … and his clear sympathy for the movement’s interest in transferring control of federal lands to the states — was part of the reason for the Patriot falloff,” the report says. “The fact that such a prominent candidate was leading the charge on their concerns resulted in many abandoning activism.”

“It is almost as if the apocalypse has been cancelled and the future history of the U.S. has been rewritten with a much happier ending,” wrote the publisher of the Economic Collapse Blog a month after Trump’s election victory, a quote noted in the SPLC report.

Aside from the declining number of Patriot groups, the SPLC points to the 41-day standoff of the Malheur National Wildlife Refuge led by Ammon Bundy in January of last year as a notable moment for the Patriot movement. The standoff resulted in the death of Robert “LaVoy” Finicum, who was shot by state troopers.

“The Patriot movement…furiously (described) Finicum as a martyr, and (suggested) that the government had deliberately murdered him,” the report says. “After his death, the SPLC counted 82 events around the country that pushed that narrative and called for action against the government. But the Patriots’ canonization of Finicum did little to invigorate the movement, as the declining group numbers show.”

In the days before the November election, one such Patriot movement militia group, the Oath Keepers, held a nearly three hour webinar for its members to outline survival tips in the event of post election unrest.

“We understand with both eyes open that we have an oligarchy that is the ruling class, the self appointed elites, who are ruling over us on both sides of the aisle,” said Oath Keepers founder Stewart Rhodes during the November webinar. “We want to see them drain the entire swamp.”

And “draining the swamp” is something Trump has promised to do.