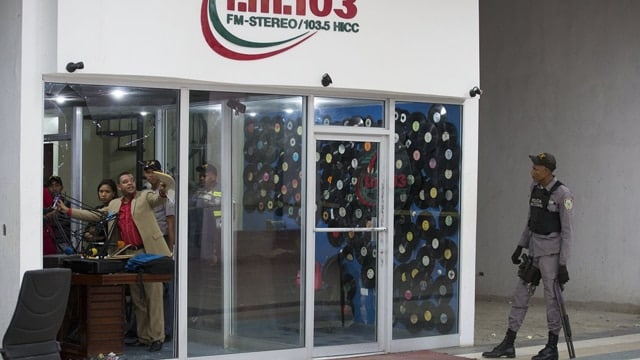 Two people were killed and a third person injured when gunmen opened fire Tuesday morning at a Dominican Republic radio station during a live broadcast.

The deceased victims were identified as Luís Manuel Medina, who presents the program Milenio Caliente (Hot Millennium) on FM 103.5, and Leo Martínez, who produces and directs the show. Dayaba Garcia, the station secretary, was also injured and required emergency surgery.

Authorities have three people in custody but have not released a clear motive for the shooting.

Olivo de Leon, from the College of Journalism, knew both of the deceased victims and said an attack on journalists like this is “unprecedented” in the country.

“The authorities must investigate to determine, not just the killers, but also the intellectual authors so that we know why they were murdered,” de Leon said. “Impunity in this case will generate fear among journalists, making them scared to speak out and do their jobs. The government must guarantee freedom of expression.”