Court overturns conviction of parent with pocketknife at school 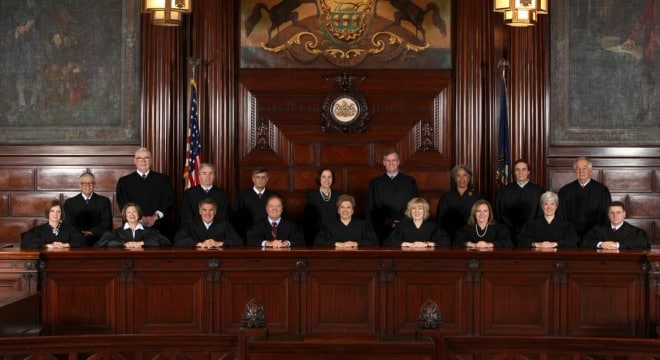 The Pennsylvania Superior Court agreed that a carpenter with a pocketknife satisfied the “other lawful purpose” part of the state’s law when carrying a weapon on school grounds. (Photo: PA Courts)

The Pennsylvania Superior Court unanimously vacated a man’s weapon conviction over having a knife on him when meeting with officials at his son’s school.

Andrew Josiah Goslin, 35, saw his conviction for possession of a weapon on school property overturned last week and kicked down for retrial by a lower court with orders to apply a plain language interpretation of state law.

Goslin came to his son’s school in Lancaster County in September 2014 to discuss a disciplinary action that involved the student’s possession of a knife on campus.

According to court documents, while at the meeting Goslin produced a 3-4 inch pocket knife he said he used in his work as a carpenter and slammed it on the conference table, asking if he would then be arrested. Ten days after the meeting, he was arrested on a weapon charge as well as making terroristic threats, the latter dropped by the court prior to trial.

Convicted on the misdemeanor weapon charge, Goslin was sentenced to one year of probation, which he appealed under the argument he had the weapon on him due to “other lawful purposes” as he carried the knife with him directly from work.

The Superior Court this week, acting on a petition filed by Second Amendment attorney Joshua Prince, found the lawful purposes clause in Commonwealth law “though broad, is unambiguous” and sent the case back for retrial.

“Although we are concerned about individuals possessing weapons on school property, we are bound by the broad defense that the legislature has provided defendants in such cases,” says the court.

Kim Stofler, president of Firearms Owners Against Crime, told Guns.com the decision is an important interpretation of weapon bans on school property in the state.

“As a result of this decision, now the single mother, who is required to drop her child off at school on her way to work, is not deprived of her inalienable constitutional right to keep and bear arms in defense of herself for the entire day, merely because she must drop her child off on school property,” Stofler said. “Moreover, the student who carries a baseball bat in his car onto school property to practice after school with friends at a nearby field, no longer has to fear prosecution, merely because the practice is a non-school activity”