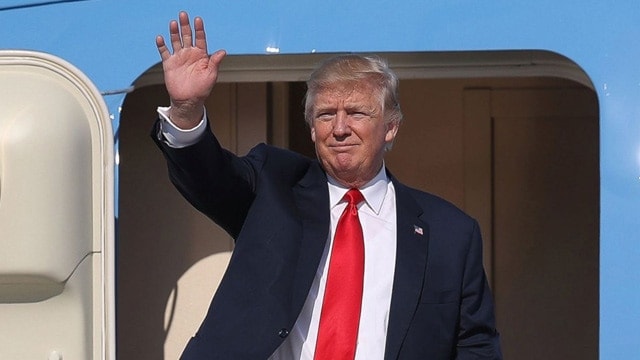 President Donald Trump steps off of Air Force One after arriving in Florida. (Photo: ABC)

For the third time since he took the oath of office last month, President Donald Trump spent the weekend at Mar-a-Lago, his exclusive, members-only luxury resort in Florida, and while the costly trips are drawing negative attention from some, one government watchdog group hopes Trump will find a solution to cutting mandatory security costs for such trips.

Trump has long favored Mar-a-Lago as a winter retreat and it appears his tastes have not changed since becoming Commander in Chief.

The exact costs of the Florida trips aren’t known, but the Palm Beach Sheriff’s office confirmed they pay out around $60,000 in overtime for every day Trump is in the area.

The Judicial Watch filed Freedom of Information Act requests in an effort to obtain the exact figures for protecting the president while he’s in Florida. According to their website, the group “seeks to ensure that political and judicial officials do not abuse the powers entrusted to them by the American people.”

The group monitored spending under President Obama just as they are now doing with Trump. Security costs for Obama’s vacations amounted to the tune of about $90 million and it appears Trump may be on target to do the same.

“If President Trump is going to go back and forth to Florida every weekend, those costs could really skyrocket,” Fitton said. “The presidency is too big, it costs too much money and if anyone is able to cut down the cost, maybe President Trump can.”

Fitton thinks Trump, who owns a number of luxury properties in various locations and even a few overseas, should choose a property closer to the nation’s capital, rather than the long-favored Mar-a-Lago.

In addition to weekend trips, reports indicate protecting Trump’s Manhattan penthouse is currently costing the New York City Police Department about $500,000 a day. First Lady Melania Trump and the couple’s son, Barron, are staying in New York City while the 10-year-old finishes the school year. At such time, they plan to move to the White House where President Trump has resided since his inauguration last month.