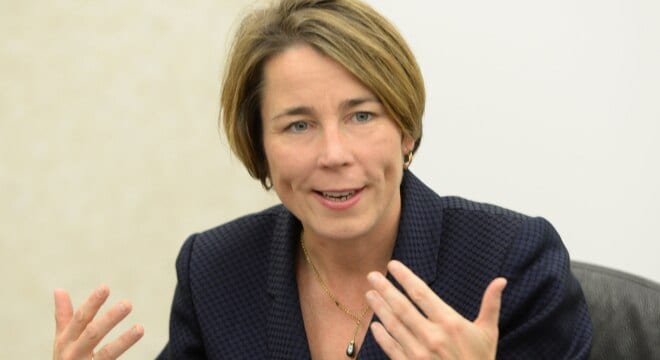 Massachusetts Attorney General Maura Healey was named as a defendant in a federal lawsuit filed last week over the state’s prohibition of Tasers and stun guns.

Three plaintiffs — Christopher Martel and Madeleine Bates of Middlesex County, and Donna Major of Suffolk County — argue their Second and Fourteenth Amendment rights are being violated by the Commonwealth’s 1986 law against the sale or possession of electrical weapons.

While each desire to have a Taser or similar device for their own reasons, the law limits them to law enforcement officers and weapons suppliers under threat of a fine up to $1,000 and two and one-half years in jail.

Martel works for an electronics company for which he sometimes finds himself in dangerous neighborhoods and feels a less lethal option for self-defense is preferable to deadly force. Major works a late-night shift at an area hospital and has a moral aversion to taking human life. Bates is a retired computer scientist and, while she has a concealed carry permit, would like the option of using a Taser or stun gun.

“Because Tasers, stun guns, and other electrical weapons are ‘arms,’ their possession by law-abiding adult citizens is protected by the Second Amendment right to keep and bear arms,” says attorney Gregory D. Cote in the Martel complaint.

The case is backed by the Center for Individual Rights, a conservative nonprofit public interest law firm based in Washington, D.C.

“Many people do not wish to use lethal means of self-defense, yet the Massachusetts law forces them to either face criminal prosecution or remain defenseless,” says CIR in a statement. “There is no compelling reason for states to criminalize law-abiding citizens for seeking a non-lethal alternative to weapons already on the market in their attempt to exercise their Second Amendment rights.”

In 2016, the U.S Supreme Court invalidated a Massachusetts ruling on stun guns, arguing they are protected under the Second Amendment. In that case, Jaime Caetano sought and obtained multiple restraining orders against her then ex-boyfriend and accepted the offered loan of a stun gun from a friend. When later confronted by her abuser while leaving work, she displayed the device and warned the man away. He left that night, but when police discovered the weapon, she was arrested, tried and convicted, as stun guns are illegal to carry under state law.

The ruling has since been used as the groundwork for several Taser ban challenges, though the ban remains in effect in Massachusetts.