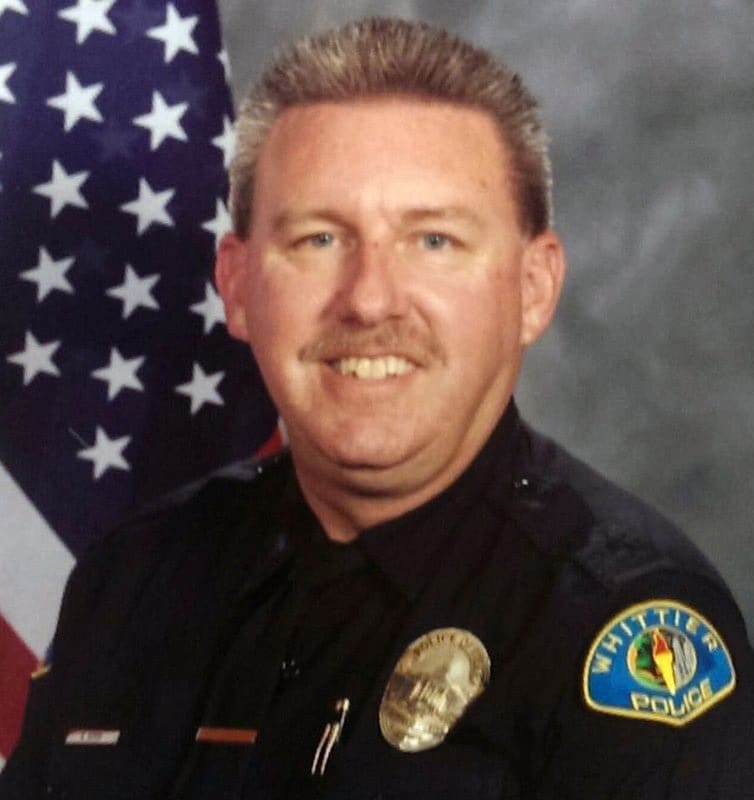 Whittier Police Officer Keith Lane Boyer was fatally shot in the line of duty Monday while responding to a call about a car accident. (Photo: Associated Press)

A gunfight Monday in the east Los Angeles County suburb of Whittier left one police officer dead, another injured and the suspect, who was also shot, in police custody.

Whittier police officers Keith Lane Boyer and Patrick Hazell were responding to a call about a traffic accident when one of the men involved opened fire on the unsuspecting officers, the Associated Press reported.

Authorities later learned the suspect is a known gang member with a serious and violent criminal history and was just granted early release from the Los Angeles County jail about a week ago. Investigators also discovered that just hours before the gunfight, the suspect stole the car involved in the accident from his cousin, who he also killed.

Lt. John Corina with the L.A. County Sheriff’s Office said the call came in as a simple traffic accident, a case of a car being rear-ended. Corina said Boyer and Hazell had no further details when they responded to the call, but believed the suspect was in need of medical attention.

Corina said when they got the suspect out of the car, they could see he had “tattoos all over his face and all over his neck.” The officers, for their own safety, began to pat him down and that’s when the suspect pulled a semi-automatic handgun from his waistband and opened fire.

“They walked up on the vehicle believing the motorist was in need of medical help and then they ended up in a gunfight for their lives,” said Sheriff Jim McDonnell.

Boyer, who was with the department for nearly 30 years, was transported to the hospital but succumbed to his injuries. Hazell, a three-year veteran of the force, was last listed in stable condition and expected to survive.

Whittier Police Chief Jeff Piper described Boyer as a friend who he had known for more than 25 years.

“All of us have been grieving and I didn’t think I had any tears left,” Piper told reporters through additional tears.

Piper said Boyer had recently talked about retiring. He was the first Whittier police officer to be killed in the line of duty since 1979.