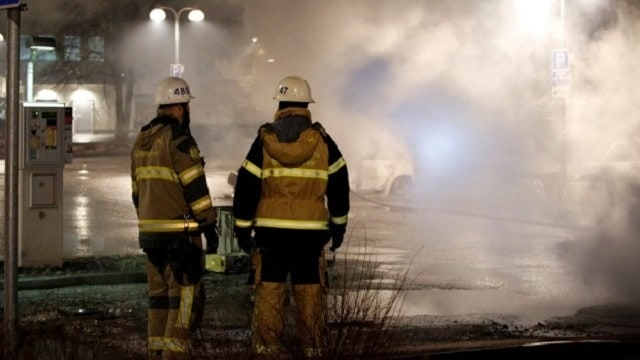 Firefighters attend to cars smoking after being set on fire during riots in a Stockholm suburb (Photo: Reuters)

Riots broke out Monday in a predominantly immigrant neighborhood in a suburb of Swedish capital Stockholm, just days after President Donald Trump criticized the immigration policy in Sweden.

The Washington Post reports the riots erupted in the neighborhood of Rinkeby, which was also the scene of riots in 2010 and 2013, after Swedish police made an arrest around 8 p.m. Monday night near the Rinkeby station.

After receiving word of the arrest, crowds of young people gathered and for over four hours vandalized shop fronts, threw rocks at police and burned about half a dozen cars.

According to Sweden’s Dagens Nyheter newspaper, police spokesman Lars Bystrom confirmed that an officer had fired his weapon with the intention to hit one of the rioters but did not hit his target. A photographer for the Swedish newspaper was also attacked and had his camera stolen.

“This kind of situation doesn’t happen that often,” Bystrom said, “but it is always regrettable when they happen.”

The Washington Post reports an analysis of crime statistics between October 2015 and January 2016, performed by the Dagens Nyheter newspaper, found that only about 1 percent of all incidents were carried out by refugees in Sweden.

However, the analysis has done little to sway perceptions, even among Swedes. According to a Pew Research Center study, approximately 46 percent of Swedes blame refugees more than other groups for crime in the country.

Despite multiple criminologists telling the Washington Post that such claims about immigrant crime were highly exaggerated, the integration of immigrants still remains a problem in Sweden.

Director of intercultural dialogue at the Swedish Institute, Henrik Selin said: “Sweden, definitely, like other countries, [faces] challenges when it comes to integration of immigrants into Swedish society, with lower levels of employment, tendencies of exclusion and also crime-related problems.”