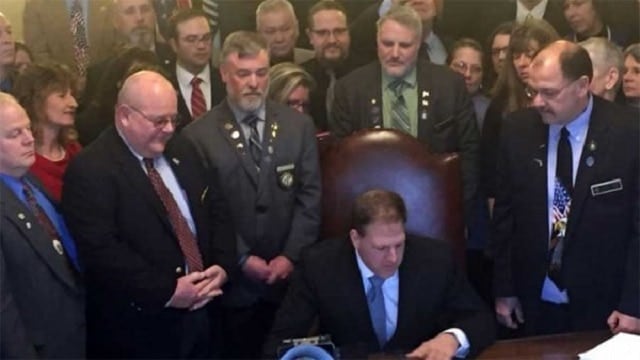 It is now legal to carry a concealed firearm without a license in the state of New Hampshire.

“It is common-sense legislation,” Sununu said at a ceremony in the Executive Council chambers. “This is about making sure that our laws on our books are keeping people safe while remaining true to the live-free-or-die spirit.”

Many supporters cheered as the bill was signed, and the NRA has applauded the signing, urging supporters to thank Gov. Sununu and legislators who worked to get the bill passed.

Many supporters argued the old permit process, in which gun owners had to apply for concealed carry permits through their local police chiefs, was too lengthy and subjective.

However, in a Tuesday night New Hampshire Public Radio discussion about the bill, Tuftonboro Police Chief Andrew Shagoury voiced concerns about the legislation, calling it potentially “dangerous” as it limits the ability of police to deny permits to people they consider dangerous.

“There’s far more restrictions in almost every other state than New Hampshire,” Shagoury continued. “You can’t carry them in schools, you have to submit fingerprints, you have to show training or suitability, ability, to get your license. None of that is in SB12 or in New Hampshire. Not that we advocated any of that, but I’m just saying, it’s an apples to oranges comparison to say what Maine has and what we have.”

In the same public radio discussion, Rep. Hoell had argued that the permit process was greatly flawed and pointed to neighboring states that had implemented permitless carry without seeing significant rises in crime.

“The vetting process for license to carry is very broken. Innocent people, even on renewals, are being denied,” Hoell said.  “And the rate is high enough, and the cost is substantial enough, that it’s creating real problems. We’ve come to the legislature, as gun owners, a number of times and said, can we fix this?”