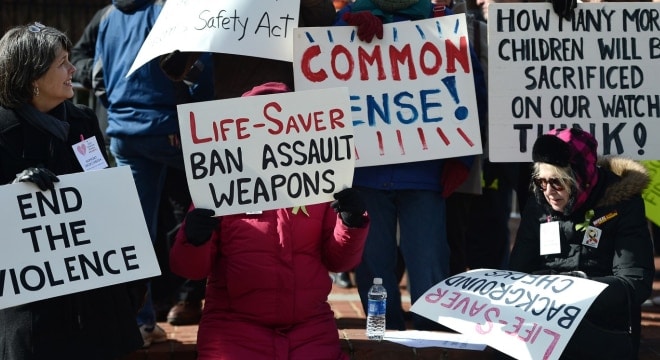 Supporters of gun control demonstrate at a rally in 2013 at the Maryland State House. (Patrick Smith/Getty Images via Washington Post)

A 10-4 panel of the U.S. 4th Circuit Court of Appeals on Tuesday upheld Maryland’s 2013 Firearms Safety Act, stating the Second Amendment doesn’t protect a right to “weapons of war.”

In a mammoth 116-page decision handed down this week, the court found the law banning certain semi-automatic firearms and limited magazine capacity to 10 rounds to be constitutional. In doing so, they went against a ruling by a three-judge panel of the same court last year which held the opposite viewpoint.

“We conclude — contrary to the now-vacated decision of our prior panel — that the banned assault weapons and large-capacity magazines are not protected by the Second Amendment,” wrote Judge Robert B. King for the majority.

King fell back on language in the 2008 Heller decision by the Supreme Court that kept Washington, D.C.’s assault weapon ban in place.

“That is, we are convinced that the banned assault weapons and large-capacity magazines are among those arms that are ‘like’ ‘M-16 rifles’ ‘weapons that are most useful in military service’– which the Heller Court singled out as being beyond the Second Amendment’s reach,” wrote King. “Put simply, we have no power to extend Second Amendment protection to the weapons of war that the Heller decision explicitly excluded from such coverage.”

Not all on the panel agreed with that logic. Judge William Byrd Traxler, Jr. wrote a dissenting opinion, joined by three other members, in which he blasted the ruling.

“Today the majority holds that the Government can take semiautomatic rifles away from law-abiding American citizens,” wrote Traxler. “In concluding that the Second Amendment does not even apply, the majority has gone to greater lengths than any other court to eviscerate the constitutionally guaranteed right to keep and bear arms.”

Passed into law just after the Sandy Hook school shooting that claimed the lives of 26 faculty and students, U.S. District Court Judge Catherine Blake in 2013 refused a move by Second Amendment advocates to block the sweeping ban. This, in turn, led to a full-blown lawsuit in the case of Kolbe et al v. O’Malley, in which Blake ruled that AR-15 style rifles and others “fall outside Second Amendment protection as dangerous and unusual arms.”

While a three-judge panel of the 4th Circuit — of which Traxler was a part — overturned Blake’s ruling, the Circuit voted to vacate that finding and grant a rare en banc rehearing in front of the full court last year.

The case was supported by more than 20 states, a host of gun rights organizations and the International Law Enforcement Educators & Trainers Association.

Groups in favor of continuing the ban included the Law Center to Prevent Gun Violence, the Brady Campaign, and states with similar assault weapon prohibitions such as California, Connecticut, Hawaii, Massachusetts and New York. The case may be appealed to the U.S. Supreme Court.