Gun scare at Houston hospital turns out to be false alarm 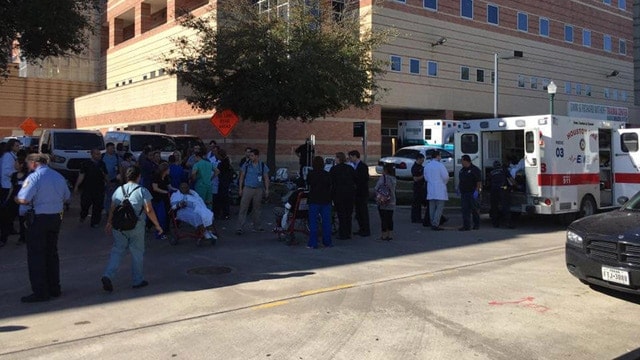 Hospital staff, patients, and visitors wait for the all clear from authorities during a gun scare. (Photo: ABC 13)

Despite multiple calls Tuesday afternoon about an active shooter at a Houston hospital, police say it was a false alarm.

Houston Police Chief Art Acevedo said during a press conference that after two full searches of every floor in the hospital, authorities found no evidence of either a shooting having occurred or anyone armed with a weapon. Still, Acevedo said, authorities responded quickly and appropriately.

Reports of an active shooter at Ben Taub Hospital started coming in around 2 p.m., prompting an immediate response from law enforcement and security measures at the hospital. Some patients were wheeled out on gurneys while other patients, visitors, and staff were told to shelter in place.

Some witnesses described mass chaos in the hospital. “Everybody panicked and started running out,” said one man who was at the hospital with his wife but evacuated during the scare.

Barbara Mushinski, a nurse at Ben Taub, said the people in the office next to hers said they heard gunshots.

“Someone said, ‘Put down the gun,’ and they all went into a room and locked themselves up,” Mushinski said.

Multiple people described hearing what sounded like gunshots followed by yelling for a man to put his gun down. However, Acevedo said they found no evidence of any such activity – no bullet holes, no shell casings, no gunman, no gunshot victims.

“The bottom line is there are multiple people that heard, ‘Drop the gun,’ and right after that, they heard two loud bangs. I mean, it’s a hospital,” said Acevedo. “Who knows what the bangs were? But I believe the hospital responded appropriately, following their protocols, and the police department did a phenomenal job.”

Within two hours of the initial calls, authorities gave the all clear and operations at the hospital returned to normal, but SWAT members were on standby at the hospital purely as a precautionary measure.