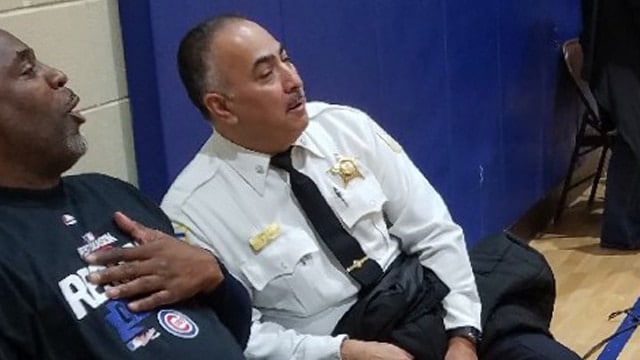 Chicago police Cmdr. James Sanchez, right, at a basketball game on the city’s West Side earlier this year. (Photo: Twitter)

As the Chicago Police Department grapples with continued gang violence and rebuilding the public trust after incidents that led to a scathing report from the Department of Justice earlier this year, an analysis of police records shows that dozens of misconduct complaints didn’t stop an officer from being promoted to commander last summer.

Local radio station WBEZ analyzed the records, obtained through a Freedom of Information Act request, and found that Ogden District police Cmdr. James Sanchez has at least 90 complaints against him in his 32 years of service. Most of the complaints alleged excessive force or improper searches. Chicago Police Superintendent Eddie Johnson promoted Sanchez to the new post in August, and now he leads more than 300 officers in one of the city’s most violent districts.

Sanchez has more than five times the average number of complaints made against the city’s 21 other district commanders, according to the analysis. Only three of the complaints led to findings against him, and a three-day suspension was the harshest punishment he faced.

Sanchez was also the lead detective on a 2002 murder case that saw the city pay out a $750,000 settlement to a man who spent three years in jail and was later acquitted. And he had ties to a Chicago cop who’s currently serving a 12-year sentence in federal prison for corruption and a plot to kill a fellow cop.

University of Chicago law professor Craig Futterman has been fighting to release police misconduct records for more than a decade. He said all of those things should have been red flags for Johnson.

The revelations about Sanchez’s background come a little more than a month after a damning report from the Department of Justice found that CPD has a broken system of accountability and has consistently violated the Constitution. Mayor Rahm Emanuel signed an agreement pledging to work on a consent decree that would reform the department, but newly minted Attorney General Jeff Sessions has spoken out against such efforts and it’s not clear whether the process will continue.

The alderman who governs part of Sanchez’s district said the high number of complaints could have something to do with his assignments over the last few decades, which includes the gang investigation unit.

“You work in places with higher crime, you have more contact with people, no one likes to be searched, no one likes to be arrested, you get complaints,” said Futterman, who said he’d heard that argument before. “But it’s a rare occasion when someone who is searched or arrested actually goes out and files a complaint. And the vast majority of those officers haven’t accumulated extraordinary numbers of complaints.”