What started as an easy program aimed at connecting police officers in Northampton, Massachusetts, with the kids in their communities was shot down after some residents expressed concern over unpleasant feelings kids may have around police.

The program, dubbed “High Five Friday,” was suggested in the fall by the Northampton Police Department and welcomed by school officials. The idea was basically to connect with kids by meeting students as they started their school day and giving them a bit of encouragement with a high five or fist bump. According to a statement from the police department, officers sometimes “even snuck in some playground time with kids.”

While the program was mostly well-received, about a dozen complaints came in from people who thought the presence of a uniformed police officer at the schools would result in negative feelings, not the positive ones the department was after.

“People were specifically concerned about kids of color, undocumented children, or any children who may have had negative experiences with the police,” the department noted.

And as quickly as the program started, it was temporarily halted, then a short time later permanently shut down. 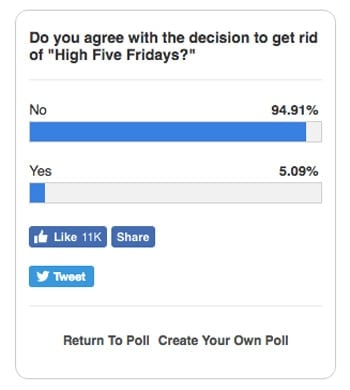 An informal poll conducted by local media showed nearly 95 percent of respondents did not agree with the decision to stop “High Five Friday.”

“For a large portion of our population this program may not seem controversial,” the department said. “However, we cannot overlook the fact that this program may be received differently by some members of our community. Most importantly, we want kids to arrive at school enthusiastic and ready to learn!”

The department said it remains “committed to exploring alternative programs” and will continue to look for other ways to connect with kids in a positive manner. Additionally, the department confirmed they will still be accepting high fives, low fives, and fist bumps on the streets.