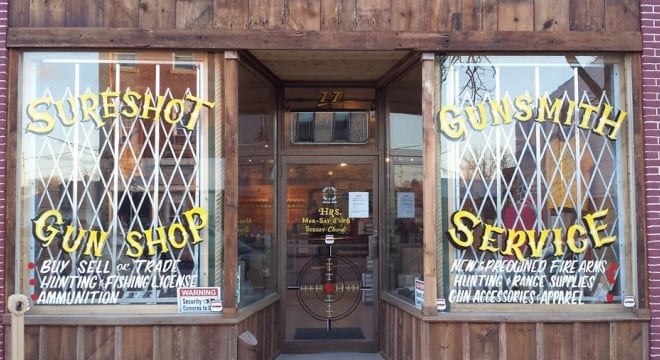 Bradley James Ries, co-founder of the Sureshot Gun Shop in Clinton, pleaded guilty to transferring a gun to a man without a background check and later trying to cover it up. (Photo: Sureshot via Facebook)

An Iowa gun dealer on Tuesday pleaded guilty to selling a gun to a man who turned out to be ineligible to have it, then later lying to federal agents about the transfer.

Bradley James Ries, co-founder of the Sureshot Gun Shop in Clinton, entered a guilty plea to transferring a firearm without a National Instant Criminal Background Check and making a false statement in regards to the required federal records on the transfer.

According to court documents, Ries transferred a Taurus Circuit Judge .410/.45 LC rifle to Matthew David Keeney on Nov. 4, 2015, without completing a background check. Three days after the gun changed hands, a pending check came back from the Federal Bureau of Investigation denying the transfer as Keeney was the subject of a protective order on domestic abuse allegations.

When a Bureau of Alcohol, Tobacco, Firearms, and Explosives agent asked Ries about the sale the following month, Ries showed the agent a Firearms Transaction Record, Form 4473, that claimed to show Keeney attempted to buy a Remington 870 20-gauge shotgun in a transfer that was not completed.

In the case of another gun transfer, Ries claimed the record had been destroyed when he spilled a bottle of gun bluing chemical on it by accident when in fact the form had not been filled out.

As part of the plea agreement, Ries agreed to surrender his federal firearms license, not seek a new one and refrain from working for a gun shop in the future.

Ries started Sureshot in 2014 with a fellow gun enthusiast on Clinton’s Main Avenue. The men told local media they were living out a dream by establishing their combination firearms retail and full-service gunsmith shop.

Ries will be sentenced June 26 at the U.S. Courthouse in Davenport, Iowa, before U.S. District Judge Rebecca Goodgame Ebinger. Each charge is a misdemeanor and carries a maximum penalty of one year in prison, a fine of up to $100,000, and as many as five years probation.

As for Keeney, he was cited last year on weapons and domestic abuse-assault charges after he fired a rifle at an area woman at her residence.