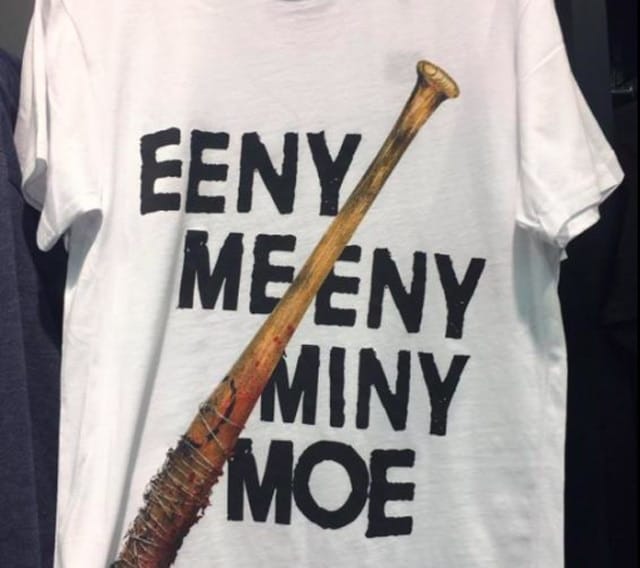 A Walking Dead-themed t-shirt was pulled from the shelves of a Primark store in Sheffield, England, after a customer complained that it was “fantastically offensive” and “racist.”

The white t-shirt bore black letters spelling out “Eeny Meeny Miny Moe” with a blood-covered baseball bat wrapped in barbed wire featured across the seemingly harmless saying taken from a children’s rhyme. But when Methodist minister Ian Lucraft and his wife, Gwen, spotted the shirt, they were undone.

“We were shocked when we came face to face with a new t-shirt with a racially explicit graphic and text,” Lucraft told The Sheffield Sun. “It was fantastically offensive and I can only assume that no-one in the process of ordering it knew what they were doing or were aware of its subliminal messages.”

Lucraft went on to explain, “The slogan is ‘Eeeny meeny miny moe…’ It stops there, but of course, we all know what the original said: Catch a n***** by his toe.”

“The graphic has a large American baseball bat, wrapped round with barbed wire, and covered with blood. This image relates directly to the practice of assaulting black people in America,” he added. “It is directly threatening of a racist assault, and if I were black and were faced by a wearer I would know just where I stood.”

Clearly, Lucraft has never seen The Walking Dead, or at least not the episode which introduces Negan with his barbed wire covered baseball bat named Lucille.

Nonetheless, Primark pulled the shirt and issued an apology.

“The t-shirt in question is licensed merchandise for the U.S. television series The Walking Dead, and the quote and image are taken directly from the show,” a Primark spokesperson said. “Any offense caused by its design was wholly unintentional, and Primark sincerely apologizes for this.”