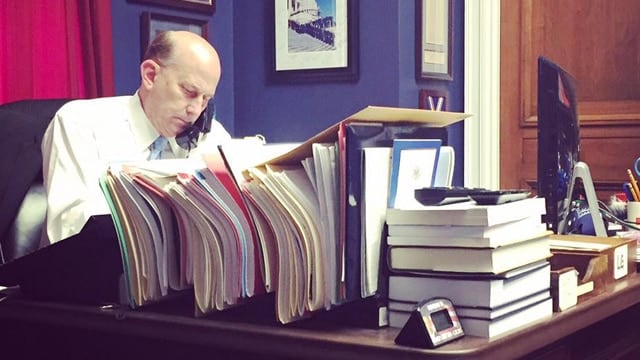 While he declined to meet with constituents in person, Rep. Louie Gohmert said he would discuss issues over the phone, so elderly folks could join. (Photo: Gohmert/Facebook)

Responding to the request by Indivisible of Smith County wanting to discuss immigration and health care reform, Gohmert advised he had already made his thoughts known on the issues and claimed violent, organized leftist groups “are preying on public town halls to wreak havoc and threaten public safety.”

“Threats are nothing new to me and I have gotten my share as a felony judge,” Gohmert said in a statement Thursday. “However, the House Sergeant at Arms advised us after former Congresswoman Gabby Giffords was shot at a public appearance, that civilian attendees at Congressional public events stand the most chance of being harmed or killed—just as happened there.”

Giffords, who was shot in the head during meeting with constituents in Tucson in 2011, joined others in criticizing Gohmert. “Town halls and countless constituent meetings were a hallmark of my tenure in Congress. It’s how I was able to serve the people of southern Arizona. I believed that listening to my constituents was the most basic and core tenant of the job I was hired to do,” she said in a statement.

Across the country Republican lawmakers have been met with crowds angry at their efforts to repeal Obamacare without offering a coherent replacement and following the White House’s lead in imposing stricter immigration rules.