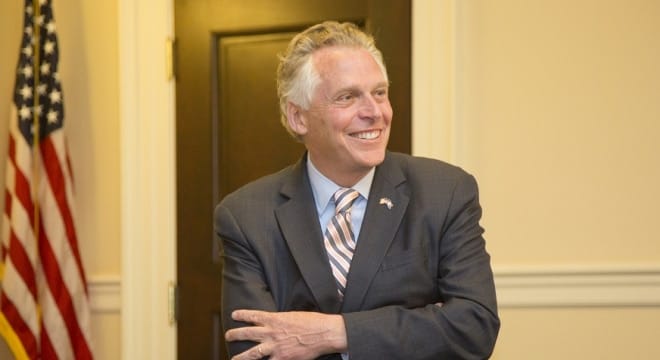 Virginia Democrat Gov. Terry McAuliffe this week killed two measures aiming to expand Second Amendment rights and has a third in his sights.

On Monday, the governor rejected bills to expand concealed carry permit eligibility to members of the military 18 years and older and to legalize the sale and possession of switchblade knives. A third proposal, to allow lawful possession of firearms at emergency shelters, is expected to get a veto in coming days.

When it came to the military age exception to Virginia’s carry permits, which is currently set at age 21 but would have been lowered by HB 1582 to 18 for those who are veterans or on active military service, McAuliffe said the move was not anti-military but instead pro-safety.

“House Bill 1582 reflects an incomplete understanding of weapons qualification practices within our military and is an unwarranted expansion in the number of people allowed to carry handguns in the Commonwealth,” McAuliffe wrote in his veto statement, contending “basic training does not qualify that individual to carry weapons in follow-on service.”

While the disaster gun ban repeal and the switchblade bill passed the state legislature by relatively narrow Republican-heavy margins, the military carry proposal was better embraced by lawmakers, earning a 78-18 passage in the House and a 24-15 approval in the Senate.

On HB 1432, designed to remove switchblades from the list of banned weapons in the state, the governor again fell back on the need for safety.

“There is no compelling need to add to the list of weapons that can be lawfully concealed from public view and easily traded,” he noted in his veto. “Legalizing the concealed carry of switchblade knives would needlessly endanger the lives of Virginians.”

According to the American Knife and Tool Institute, 15 states have bans on the sale and use of automatic, or switchblade, knives with Louisiana being the only other Southern state besides Virginia to have a prohibition. Similar legislation is afoot in Colorado to repeal the ban in that state.

House Bill 2077, which would amend the Commonwealth’s disaster law to prevent bans on carrying or possessing otherwise legal firearms in government-run shelters during times of declared emergency, also has a meeting set with the Governor’s veto pen. While other states have enacted comparable measures, McAuliffe’s office has signaled he is not a friend of the legislation.

“He doesn’t believe that we should be injecting more firearms into situations that are often fraught and sometimes dangerous,” said McAuliffe spokesman Brian Coy.