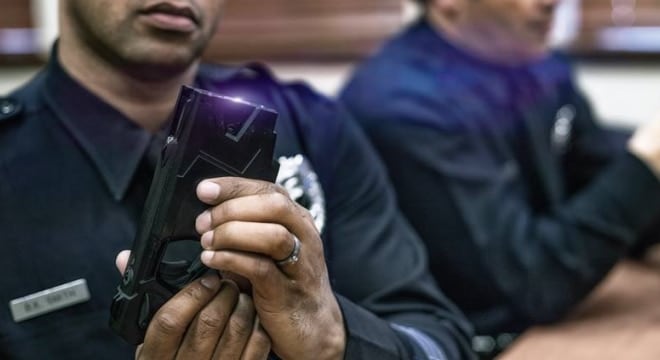 Until this week both Baltimore and Howard County restricted Tasers and stun guns to police use. (Photo: Taser International)

A series of local Taser and stun gun bans in Maryland are effectively over just weeks after a group of area residents filed suit in federal court.

On Thursday, U.S. Chief Judge Catherine C. Blake signed off on an order approved by the city of Baltimore putting its prohibition on electronic weapons on ice while officials work on a more formal legislative repeal of the ban.

Under the guidelines of the order, Baltimore officials will not enforce the ban on possession of electronic weapons either against the six plaintiffs in the case or others, and pick up court costs and attorney fees.

“With regard to litigation about the use of electronic weapons in Baltimore City, the city and plaintiffs have agreed to wait up to 90 days to allow for potential legislative action by the city which would remove the need to move forward with the lawsuit,” noted Baltimore Mayor Catherine Pugh’s office.

The half-dozen plaintiffs in the case — Leah Elizabeth Baran, Lawrence McClain, Douglas S. Hansen, Stephen Schmidt, Daniel J. Carlin-Weber and Jon Fontaine — sued Baltimore city, its county and Howard County in January over area bans on the possession of electronic weapons. Under local ordinances, those caught with a Taser or similar device face up to a $1,000 fine or imprisonment for as long as six months.

The Howard County Council earlier this week voted 4-1 to repeal its ban.

“This is a great victory for both the Second Amendment and the right of Baltimore residents to protect themselves,” Arsenal Attorneys’ George Lyon, who served as lead counsel in the case, said in a statement.

Maryland state law restricts electronic weapons to those over 18 and forbids their use by those convicted of a crime of violence. Local bans on the devices abounded until 2013 when Anne Arundel County voted to allow the use and carry of Tasers and stun guns.

Since then, the U.S. Supreme Court has weighed in on the issue, noting the devices are allowed protection under the Second Amendment. This has resulted in a litany of federal lawsuits against restrictions in Louisiana, Massachusetts, New Jersey and Washington D.C. in recent months.