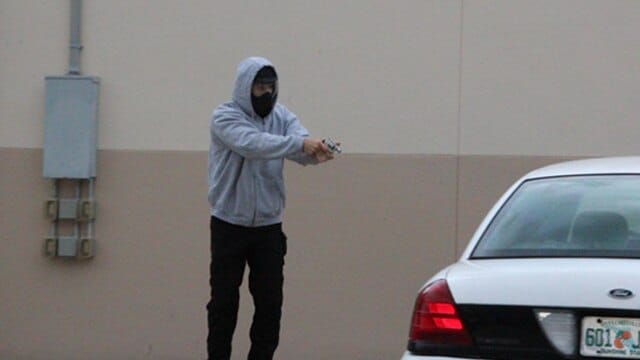 Punta Gorda police officer Lee Coel as he fired a round that struck 73-year-old Mary Knowlton, who was standing on the opposite side of the police car. Knowlton later died as a result of her injuries. (Photo: Sue Paquin/Charlotte Sun Herald)

A Florida police officer and his superior were charged this week for the deadly shooting of a retired librarian at a community policing event last summer.

Coel, 28, turned himself in to authorities on Wednesday, more than seven months since he accidentally killed 73-year-old Mary Knowlton with a loaded revolver during a community training session. For the felony charge, he faces up to 30 years in prison and a $10,000 fine. Lewis, who was served with a summons, could see up to 60 days in jail for the 2nd degree misdemeanor.

State Attorney Stephen Russell explained at a press conference his office was able to illustrate exactly what happened by reviewing a large volume of evidence and interviews, but it could still take weeks before the Florida Department of Law Enforcement release a report on the Aug. 9 shooting.

“This is a somewhat unique, difficult case,” Russell said.“Difficult for the community, difficult for those involved, difficult in some respects for a prosecutor. But we have to do what’s appropriate in terms of holding people accountable in that regard.”

What’s most baffling about the turn of events for onlookers is how easily the incident could have been avoided. Courses like the eight session “shoot/don’t shoot” training exercise that killed Knowlton are demonstrated to show how little time officers are given to respond in a use of force incident, but they usually employ simulated weapons instead of real guns.

Safety experts were quick to condemn the police department in the wake of the shooting. “If the Punta Gorda Police Department followed even the most basic rules of firearms safety, the death would never have occurred,” said Lee Williams, in his gun writer blog for the Sarasota Herald-Tribune in August.

“There’s a good reason why no sane firearms instructor would ever use a real weapon during force-on-force training,” Williams said. “Eventually, someone will forget to unload and clear a weapon and tragedy will result.”

Since the incident, the city of Punta Gorda paid out a $2 million settlement to Knowlton’s family and placed Coel on administrative leave, but announced plans Thursday to hold a hearing to determine his future employment status with the department. Lewis has been placed on paid leave as a result of his charge.

Coel, who was hired by the department in 2014, was previously involved in an incident that led to a $70,000 settlement for the city. On Oct. 30, 2015, Coel, a K-9 officer, released his dog on a man during a DUI arrest. The man’s injuries required surgery and an 11-day stay in the hospital, according to the Sarasota Herald-Tribune. Coel’s police dog duties were suspended after the incident, during which the department revised its policy, but he returned to work a short time later.

“I’ve been saying for months that this guy was going to kill somebody and now he has killed somebody,” said Scott Weinberg, the attorney for the man in the K-9 incident. “Everybody had been put on notice that he was a loose cannon, that he should not have had a badge and a gun.”